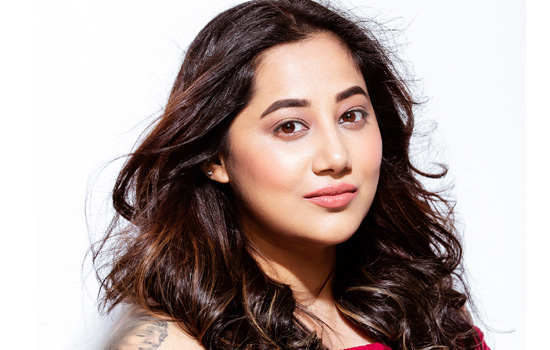 As Dil De Diya from Radhe Radhe, composed by  Himesh Reshamiya and picturised on Salman Khan and Jacqueline Fernandes,  releases today, Payal Dev's mellifluous voice once again creates history.
One of the most sought-after upcoming musicmakers today in the Hindi Film Industry, Payal Dev started her career as a singer, but a chance encounter escalated her journey from being just a singer to being a singer-composer.
Nevertheless, this bundle of talent is being sought after by all composers for her unique voice texture and the ability to sing across genres with effortless ease.
"Every song is unique and crafted with love by the composer and bedecked with jewels by the arranger. The singer is expected to deliver the crown jewel and each time I lend my voice to a melody, it is a life-changing experience," gushes Payal Dev.
Speaking of Dil De Diya, Payal feels that it is a double win for her with the superhit combination of Salman Khan and Himesh Reshammiya combined with her voice in a jumma song, releasing on a Friday.
Says she, "Himesh bhai knows the texture of my voice. His vision is clear as a composer. He knows what he wants. And it is very easy to sing for him as he directs you through the song effortlessly.
The essence of a song is in its vibe when you hear it for the first time. This song had the essence and mood of Jumme ki Raat. I had sung Genda Phool and Saasein hui Dhuan Dhuan in Race and this is my third song for Jacqueline & fourth song for Salman bhai
I followed Himesh bhai's thought and vision and he knew I could deliver. And that was most important. He loves my voice texture and explores a newer dimension of my voice, a different texture, a different feel, a different tone. This was a dance track and you need that mood when you dub. This is very important for me. As a singer, when you feel the essence of his creation and take it forward, the results are magical. Like in the case of Dil De Diya," she elaborates.
If you recall, Tum Hi Aana, Payal's first chartbuster opened floodgates of offers for her as a composer and since then, she has delivered hits one after the other whether the song has been for movies or for a digital release.
In a very short time, she has seen a mercurial rise in her career as a composer and singer due to all the love from the fraternity and fans alike.
Payal, who started her professional journey in Mumbai by singing for several brand ad-film jingles, documentaries, corporate songs for various music directors, is also the voice behind title song of Grand-Masti, a runaway hit.
Payal had lent her voice to songs in movies like Bajirao Mastani, Race 3, Dabanng 3, Student of the Year 2, to name a few, besides independent Songs - Genda Phool, KYON, Dil Chahtey Ho, Baarish, Bepanaah Pyaar among others.
Be it singing or composing Payal loves exploring new sounds and styles while delving with different genres like pop, western, jazz, ghazals, hip-hop, rock, and more.
She’s a true devotee of music and for her, each song is like a baby which she wants to nurture and grow to the full potential, so that her fans and music lovers are left mesmerised.
Dil De Diya is another feather in Payal Dev's overcrowned cap. And the Salman Khan-Himesh Reshammiya combination adds to that glitter as much.