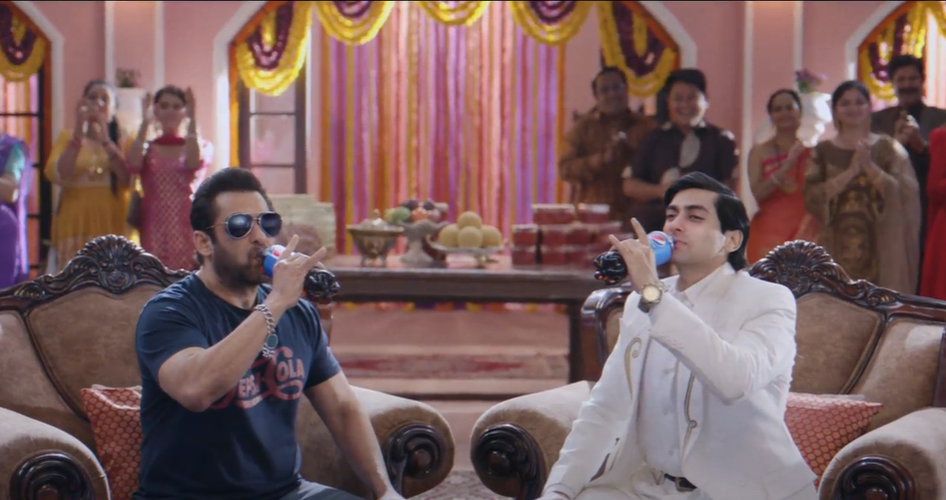 Udaipur : Ringing in the summers with one of the most anticipated campaigns of the year, beverage brand Pepsi unveiled its latest campaign featuring brand ambassador Salman Khan. Bringing back the magic of innovative storytelling, the latest TVC showcases Salman Khan in a dual role and makes Pepsi the first-ever brand in India to use ultra-hi-tech Deepfake technology to recreate an iconic Bollywood character. Taking the swag quotient several notches up, the film features Prem - one of the most loved characters from the 90's, coming face to face with the modern-day Salman Khan.

Bringing back the nostalgia of the 90's, the film opens in a bungalow where Prem bumps into Salman from the future. 'Swagat nahi karoge hamara?' asks Salman leaving Prem curious for more. Thrilled to see his hunky future SWAG avatar, Prem engages Salman in a series of questions to know more about his future self. Future me bhi meri body? Same. Fans ka pyaar? Same. Aur Shadi? Hogyi Tumhari sab girlfriends ki - this fun banter between Salman and Prem is sure to leave fans completely entertained. The TVC cheekily concludes to reinstate that while all else may remain same in the future, Pepsi® has more fizz and more refreshment this summer.

Speaking on the launch, Saumya Rathor, Category Lead, Cola, PepsiCo India, said that as a culture-curator, Pepsi has constantly endeavored to bring entertaining campaigns for its consumers through innovative storytelling. With Bollywood being a key consumer passion point in India, this new campaign takes the SWAG narrative several notches higher by featuring not one but two Salman Khans. For the first time in Indian advertising, we have leveraged hi-tech deep fake technology to recreate one of the most iconic characters of Indian cinema. We are confident that this campaign will resonate strongly with our consumers, given the entertainment quotient in this film."

Pepsi brand ambassador and Bollywood superstar, Salman Khan, said, "My fans have showered love to all my characters over my career, however Prem has held a special place in their hearts as well as mine. It brings me great joy to bring back Prem as a blast from the past with Pepsi for my fans for this new campaign. The storytelling, the nostalgia, the double trouble - shooting for the More Refreshing Pepsi film has been a great experience and I am very excited for my fans across the country to see it."