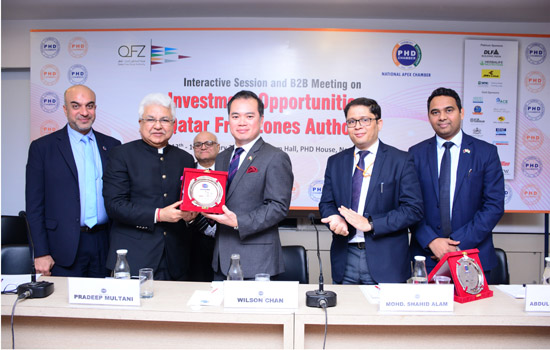 Qatar, the Gulf nation that sits at the intersection of Asia, Africa, and Europe, promises a hassle-free investment environment with advantages that business people the world over dream of – sound infrastructure, excellent ease of doing business, and an investment-friendly administration.

Mr. Wilson Chan, Director, Markets, Qatar Free Zones Authority, was at the PHD Chamber in New Delhi on Monday to hard sell Qatar as an investment designation in general and the Free Zones he runs in particular.

Addressing a gathering of industrialists and business leaders at the PHD House during an ‘Interactive Session and B2B meeting on Investment opportunities in Qatar Free Zones Authority’, Mr Chan said that there was no better place and no better time than to invest in Qatar, which will be hosting the 2022 football world cup.

The potential and possibilities are unlimited, Mr. Chan said launching into his address inviting the Indian investors to consider the advantages his country and more specifically the Free Zones offered – zero corporate tax for 20 years, no individual tax, 100 percent foreign ownership, No GST or VAT, no customs duties.

For the present, Qatar was focusing on three areas – Logistics, downstream Chemicals, and emerging technology sectors of IT, AI, ICT, drone technologies, renewable energies, and the like.

Already, the technology area was resonating well with the Indian companies, said Mr Chang. The Free Zones also had a fund of US $ 1 billion for encouraging startups that already have a concept and revenue steam with potential.

The Free Zone Authority will line up such startups with venture capital funds so that all can grow together. Qatar has two Free Zones – The Airport Free Zone at RasBufontas in an area of 4 sq km and the Port Free Zone at Umm Alhoul spread over 32 km.

We can cater to almost all kinds of businesses in the services and manufacturing sector. There are opportunities in the ICT solutions, Apps development, F &B, hotels, hospitality, mainly because of the world cup football championship in 2022.

It is possible to shift an entire factory from Delhi and relocate to the Free Zone, said the official from Qatar Free Zone Authority. There are no restrictions even on the movement of labour. You can import all the labour from any country or can even hire locally from available poor of human resources, said Mr. Chang.

Describing Qatar as an economic power at the center of a dynamic and growing region, he said, the country had all the right ingredients for investing – solid world-class infrastructure, highways, power and globally acclaimed best practices. More importantly, he said, Qatar had a stable economic environment and high per capita GDP, among the highest in the world at US $ 124,429. In the last ten years, Qatar has diversified organically and focused on strategic growth.

Earlier welcoming Mr. Chang, Mr Pradeep Multani, Vice President, PHD Chamber, expressed happiness over the growing trade and bilateral relations between the two countries, on the back of substantial engagements at the government level. The bilateral relations got strengthened after the visits of His Highness Sheikh Tamim bin Hamad Al Thani, Emir of the State of Qatar to India in 2015, and Prime Minister Shri NarendraModi’s visit to Qatar in 2016. Several MoUs were signed during the Prime Minister’s visit, said Mr. Multani.

The Qatari team of officials will spend one more day with the PHD Chamber for individual meetings with businesspeople and industrialists on Tuesday.


Source :
This Article/News is also avaliable in following categories : Business News
Your Comments ! Share Your Openion