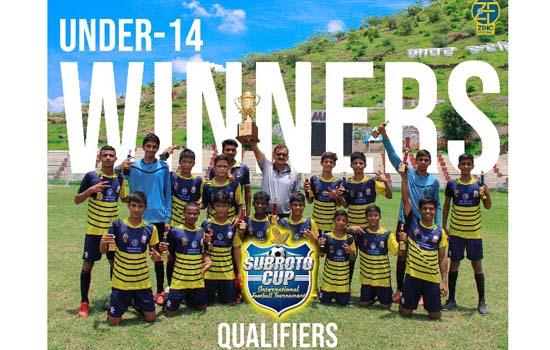 Zinc Football Academy footballers have won the regional qualifiers and earned the honor to represent Rajasthan at the under-14 Subroto Cup to be held next month.

In their quest to become Rajasthan’s best, the Footballers from Hindustan Zinc’s Zinc Football Academy project competed against 11 other school teams from the state in the qualifiers, held from 21st to 23rd July at Zawar Stadium. Our boys scored a mammoth 45 goals in just 4 matches, without conceding even a single goal. 13-year old Janminthang Haokip was adjudged the player of the tournament, scoring 12 goals.

This triumph comes in the wake of our under-17 boys having already claimed the top spot in the under-17 Subroto Cup qualifiers back in May. Conducted by the Indian Air Force, with support from India’s Ministry of Youth Affairs & Sports, the Subroto Cup football tournament is the most famous and competitive inter-school football tournament in India, started back in 1960.

Wish them luck as they now prepare to go to Delhi to compete with the best teams in the country in August/September at the Subroto Cup nationals.

The information contained in this electronic message and any attachments to this message are intended for the exclusive use of the addressee(s) and may contain proprietary, confidential or privileged information. If you are not the intended recipient, you should not disseminate, distribute or copy this e-mail. Please notify the sender immediately and destroy all copies of this message and any attachments contained in it.


Source :
This Article/News is also avaliable in following categories : Zinc News
Your Comments ! Share Your Openion