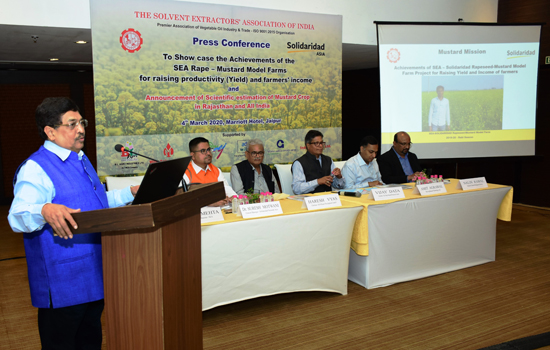 Udaipur:| The apex edible oil industry body The Solvent Extractors’ Association of India together with Solidaridad isimplementing mustard model farm project with objectives to overcome production constraints in mustard crop and reduced dependency on imports. The mission mustard is aiming to increase the production of rapeseed-mustard by 200 lakh tons by 2025, through bridging the yield gaps by widespread adoption of scientific practices and improved technologies by farmers. It will allow Indian mustard farmers to produce more mustard per unit area, revolutionizing mustard farming and edible oil production in the country.

India has emerged as the largest importer of edible oils in the world. The domestic consumption of edible oils has touched the level of about 230 lakh tons in 2018-19, which is likely to increase further with growing population and per capita income. Currently, India produces around 80 lakh tons (2018-19) of edible oil. The gap between production and consumption is being met through imports of around 150 lakh tons edible oil (2018-19). The nation’s dependency on imported edible oil is a matter of concern and to address this challenge, India needs to critically look into the ways and means to increase productivity ofoilseeds crops including important crops i.e. mustard.

In India, Rapeseed and Mustard accounts for nearly one third of edible oil produced through primary sources making it country’s key edible oilseed crop. It is one the most promising oilseed crop for reducing dependence on edible oil imports. Besides this, the crop offers higher returns with low cost of production and less water requirement for irrigation. It holds immense importance for the livelihood security of the farmers in rainfed regions.The crop has achieved significant growth in the past, however the productivity levels are still low in the country, which can be addressed through effective transfer for improved production technologies, scientific practices and ensuring supporting infrastructure facilities.

Under the pilot project, 100 mustard model farms are set-up which covers around 2500 farmers in Bundi and Kota Districts. The model farms demonstrate scientifically proven technologies and good production practices.The farmer field schools are organized for sharing of technical knowledge, experiences exchange and cross - learning among farmers. The SEA Mustard

“Mustard is the most promising oilseed crop for increasing the domestic edible oil production and to make India self-reliant in edible oil while enhancing income and livelihood of farmers. We are confident that Mustard Model Farm project would significantly advance the existing practices and contribute towards income and livelihood of farmers, increase edible oil pool to attain the self-sufficiency and foster the growth of domestic edible oil industries said, Mr Vijay Data, Chairman of SEA Rape-Mustard Promotion Council.

“There are enormous opportunities for improvement in production and productivity of oilseeds crops and thus, improving the lives of the farming family dependent on agriculture and allied activities. The joint efforts made by Solidaridad together with SEA, would allow farmers’ access to cutting-edge technologies and agronomic practices to overcome production constraints as well as access to better infrastructure facilities and profitable markets. We appreciate the technical knowledge support provided by the Directorate of Rapeseed - Mustard Research – Government of India for mustard model farms and we look forward for continued cooperation and support from the institute. We remain committed to work together for the large-scale expansion of such initiative. Said in a quote, Dr Suresh Motwani, General Manager of Solidaridad Network Asia”

The successful implementation and positive outcomes from the pilot project will provide us proof of concepts and set of best practices for county-wide expansion of this initiative towards achieving the ambitious target of increasing production of rapeseed-mustard by 200 lakh tons by 2025. Additionally, the objective is also to shift the area to Mustard particularly in Punjab and Haryana by demonstrating the financial viability of Mustard over conventional crop like rice, wheat and sugarcane. This will enhance the contribution of sector in Indian economy, food security, well-being of farmers as well as employment creation. Said, Mr Haresh Vyas, Chairman Oilseed Development Council of SEA

“Rapeseed and Mustard is one the most promising oilseed crop for reducing dependence on edible oil imports. The effort made through the mustard model farm project will significantly contribute towards the Government of India’s vision towards attaining the self-sufficiency in edible oiland doubling the income of farmers through advancement in existing practices, mechanisms and processes”said Dr. B.V. Mehta, Executive Director of The Solvent Extractors’ Association of India.

It is the high time to support oilseed growers through the efficient extension support for bridging the awareness gap among farmers regarding better techniques, coupled with access to quality inputs, seeds and markets towards increasing the domestic availability of edible oil and improving the livelihood of farmers. We look forward to further mobilize support from the Government of India and industry members for large scale expansion of mustard mission Said Mr. Vijay Data, Chairman of the SEA Rape-Mustard Promotion Council”

This innovative initiative provides “proof of concepts” and a strong base for further replication at national level with tailored model/solutions to the need of different regions in country.