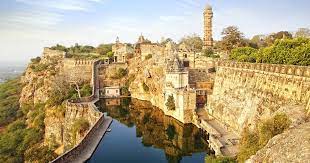 Chittorgarh is home to the "Chittor fort", the largest fort in India and Asia.It was declared world Heritage by UNESCO in 2008. The fort was built by "Chitranga Mori", a king of the local Maurya dynasty. It was the site of three major sieges (1303, and 1567-1568) by muslim invaders, and its Hindu rulers fought fiercely to maintain their independence. The fort is the symbol of the death of several men who fought for it and the Jauhar (mass self-immolation) committed by women.

The fort precinct has several historical palaces, temples, two prominent commemorative towers and seven gates (Pol), namely, the Pandam Pol, Bhairon Pol, Hanuman Pol, Ganesh Pol, Jodla Pol, Laxman Pol and the main gate named the Ram Pol. All the gateways to the fort have been built as massive stone structures with secure fortifications for military defense. Apart from all these, the sprawling fort has a plethora of palaces and temples within its precinticts which are worth visiting.

Successful treatment of 4 patients who have cancer in Paras Hospital