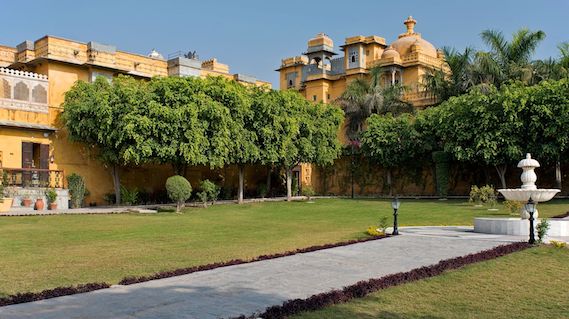 Gogunda was the temporary capital of Mewar for some years, when Udai Singh shifted his base here and left Chittorgarh after Akbar besieged it. He also died here in 1572 and Maharana Pratap's Raj Tilak was performed here. It was near Gogunda that the Battle of Haldighati was fought in 1576 between the armies of Maharana Pratap and the Mughal Army under Raja Man Singh.Raja Todermal and Man Singh came from Jaipur to meet Pratap in Gogunda. We can see Maharana Udai Singh's Smarak here. The huge fort of Gogunda is in dilapidated condition today.Gogunda abounds with Hindu and Jain temples. It has 3 Jain temples. There are also a shiv temple and a charbhuja and a hanuman temple.Rajtilak of Maharana Pratap was completed by Masaliya Rawal – Rajpurohit of Jhala Rajput.It is a small town and Tehsil headquarters in Udaipur, located about 35 k.m. in North-West from Udaipur city. It is situated on a high mountain in Aravalli Hills and is reached by crossing a difficult mountain pass.