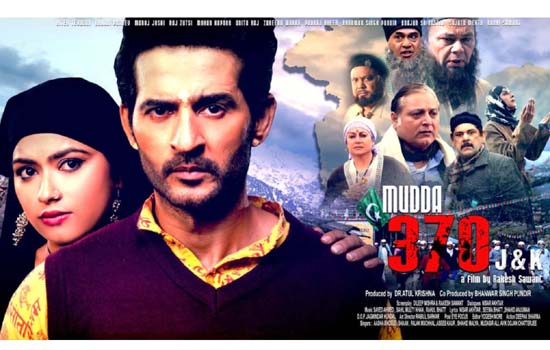 These days, Bollywood films are being made on issues that the audience is liking. A film based on one such important issue, 'Mudda 370 j&k' is ready for release this month. The film, starring Hiten Tejwani, Mohan Joshi, Zarina Wahab, and Anjali Pandey, is produced by Dr. Atul Krishna and co-producer Bhanwar Singh Pundir. Releasing on December 13th, the film also has a special song by Rakhi Sawant which is sung by Asha Bhosle. The director of the film is Rakesh Sawant. Recently, CM Trivendra Singh Rawat launched the teaser of the film 'Mudda 370, J&K' in Dehradun. The entire team related to the film was present there. Filmmaker Bhavar Singh Pundir says that the film narrates the burning issues of Kashmir and the pain of migration from Kashmir. 50 percent of the film is shot in Uttarakhand.

The Chief Minister of Uttarakhand called the film based on contemporary themes and said that the removal of Article 370 has helped in connecting Kashmir with the mainstream of the nation. What happened to the love story of a Kashmiri Pandit boy and a Kashmiri Muslim girl? It is shown in the film. The reason and effect of Article 370 are also shown in this film.

This is a very serious and sensitive film, describing the pain of Kashmiri Pandits. Asha Bhosle has sung an item song in the film which has been shot on Rakhi Sawant. The composers of this film are Syed Ahmed, Sahil Multi Khan, and Rahul Bhatt, while the lyrics are penned by Nisar Akhtar, Seema Bhatt, Shahid Anjum. The film has singers like Asha Bhosle, Shaan, Palak Muchhal, Asees Kaur, Shahid Mallya, Mudasar Ali. Director Rakesh Sawant is doing a film 'POK' after this film, whose shooting will start next year.