ZINC FOOTBALL WILL PLAY A CRUCIAL ROLE I

ZINC FOOTBALL WILL PLAY A CRUCIAL ROLE IN THE DEVELOPMENT OF THE INDIAN NATIONAL TEAM, SAYS AIFF PRESIDENT KALYAN CHAUBEY 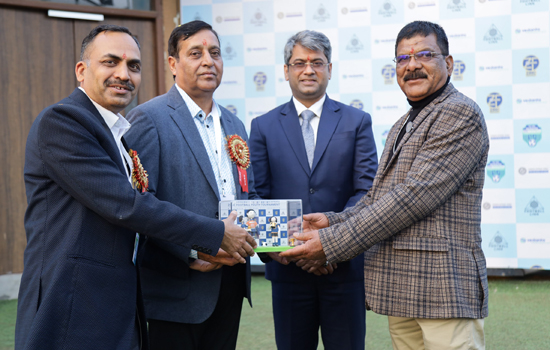 Udaipur : Mr Kalyan Chaubey, President, All India Football Federation, visited Hindustan Zinc’s Zinc Football Academy in Zawar, Udaipur on Saturday. The President of the country’s apex footballing body engaged in an interactive session with the young footballers of Zinc Football and was pleased to see the world-class infrastructure in Zawar, further sharing his delight over the Academy’s incredible performance at the ongoing Hero Under-17 Youth Cup.

A former Indian Footballer himself, Mr Kalyan Chaubey, President, AIFF on his visit said: "Hindustan Zinc is doing an incredible job. I am very happy to see the infrastructure here. Zinc Football will not only help Rajasthan Football but also play a crucial part in the development of the national team. The Academy has already produced two players for the national under-17 team and I am sure with the talent and passion they have, there will be more in the coming times.”

Speaking on the occasion, Mr. Arun Misra, CEO of Hindustan Zinc, said, "Over the last few years, Hindustan Zinc has been developing a strong grassroots football structure through Zinc Football. We believe in promoting the world's most popular sport to improve the lives of underprivileged communities in Rajasthan. We are happy to host respected Mr. Kalyan Chaubey, President of All India Football Federation at our Academy. His vision and love for the sport will surely take Indian Football to greater heights."

The dignitaries also extended their best wishes to the Zinc Football team who will be playing the knockout round of the Hero U17 Youth Cup in Hyderabad.

Zinc Football is an initiative of Hindustan Zinc to usher in a footballing revolution in Rajasthan. It is a one-of-its-kind grassroots development programme with technology and data analysis at its core at Zawar near Udaipur, Rajasthan. The programme is using football as a tool for social and community development and ensuring young boys and girls have a platform to express themselves through football.