Transforming the way ahead for e-bikes 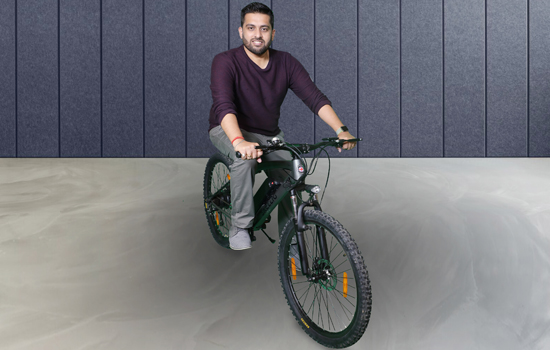 The Indian population largely moves on two-wheelers, with approximately one-third of all households owning one. Two-wheelers also account for as much as 75% of India’s vehicular emissions, unfortunately putting the majority of the onus of emission reduction squarely on the shoulders of those riders. It is for this reason that the Indian government unveiled its EV subsidy programs, FAME (Faster Adoption and Manufacturing of Electric Vehicle). This has helped in driving the adoption of electric-scooters on Indian roads. However, the rate of adoption is still low primarily due to the heavy upfront cost and the lack of charging infrastructure.
This is where electric bicycles, aka e-bikes, play a crucial role. With their ease of use and maintenance, low upfront cost, high energy efficiency and portable design, e-bikes have rapidly been seen as the most viable option for intra-city mobility. Delivery personnel, for eg., have seen an effective rise in delivery fulfilments when using e-bikes as opposed to the traditional scooter and motorcycle. E-bikes have become a very eco-friendly alternative to the large two-wheeler using population.
Innovations in e-bikes are increasing rapidly. Bulky lead-acid batteries have made way for much more compact & lighter nickel cadmium and lithium-ion batteries. Innovations have also given rise to newer trends including folding e-bikes and IoT enabled smart e-bikes with app connectivity. With such development, e-bikes have become a highly sustainable and effective solution to the air pollution and traffic congestion woes of India. However, the cost of an e-bike is out of reach from most of the country’s two-wheeler riders. The government’s focus on EVs has still been restricted to only the motorized vehicles and hence, is inadvertently missing out on the massive opportunity at hand.
From the perspective of e-mobility, the government should extend the benefits and subsidies under FAME II to electric bicycles as well. Since e-bikes operate at a much lower speed bracket, they are not extended the benefits of the FAME II program. This would help manufacturers to make their e-bikes much more accessible to the end consumers. Apart from being eco-friendly, e-bikes also solve the issue of traffic congestion and range anxiety (an issue that plagues the EV industry) since they can be pedalled even without battery charge.
Also schemes such as public bicycle sharing systems across cities to promote the use of e-bicycles. The government must also consider offering incentives to people who chose to cycle to work. In countries like the United Kingdom, tax reliefs are offered to people according to miles cycled.
Under government initiative of skill India, more workers should be trained for electric vehicle manufacturing. There is a lack of reserves of material like nickel, cobalt which forced the manufactures to be dependent on imports. The government must initiate policies to promote use of e-bikes with fiscal incentives for greener mobility. Incentives should be passed on directly to customers to encourage them to ride and purchase e-bikes. If we want to move towards pollution free spaces and bring down the energy usage, then electric bikes are the way to go.