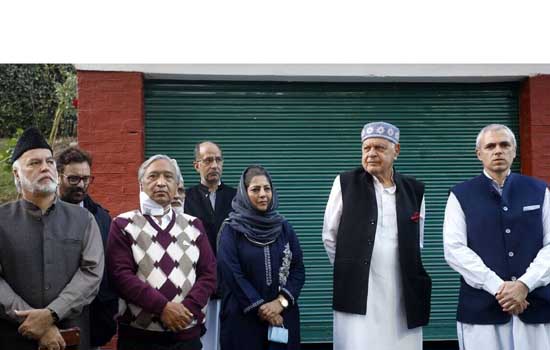 Union Home Minister Amit Shah recently launched a scathing attack on the political front called People's Alliance for Gupkar Declaration (PAGD) in the form of National Conference, PDP, People's Conference and CPIM, saying that the Gupkar gang will bring Jammu and Kashmir back to terror, violence, unrest and upheaval. This secret political party is contesting the elections of local bodies in the state. As of now, Congress has no declared agreement with them, but there is a discussion about the coordination of seats at the local level. Should the darkness of peace, harmony and democratic process never recede with the increasing activism of the group?

The Home Minister has addressed the group as a gang rather than a political party, even though some people may not agree, there may have been some reasons to call it a gang. An entire environment which is being created, it is going to increase terror and unrest, and it does not seem to reduce at all. Why is there a need to make anti-national, terror and unsustainable activities and ideas contagious? The process of peace and development of the province should be interrupted. In the midst of the aggressive and anti-national activities of the group, how can we imagine that violence will not increase, terror will not grow and unrest will not increase? So the first thing to pay attention to is the environment of Kashmir, the atmosphere there. What kind of environment have the local political parties created around them? Till that does not change, events and instruments that provoke violence and terror will emerge.

The efforts of the Government of India to establish peace in this province of terror and violence have definitely become the basis of vibrant democracy. There is a need to give a chance to the settled civilized political voices to be active rather than the so-called voices of political and communal parochialism in Kashmir, to unveil new avenues of development and peace; it is natural for the Home Minister to be a particularly aggressive attacker. . If these parties are adamant on the demand for the return of Article 370 in the state then how and why can they agree to this demand? The Constitution of India and the democratic system here allow them to speak in a peaceful manner, but their anti-national activities and statements are not acceptable in any case.

The Central Government and the Bharatiya Janata Party have been saying that the decision to abolish the special provision under Article 370 has been taken in the interest of the people of the state, which had been felt for a long time. Now the election is the appropriate time when BJP workers can go door to door and explain the merits of this decision to the people and they should also explain. One should also expose the undemocratic activities of the political organizations of Jammu and Kashmir and the statements and opinions that have given rise to terror-unrest and violence in the province.

This will enable democracy to be established there. Even after sitting away, every Indian is feeling deeply and seeing that an atmosphere of peace, harmony, development and co-life is being created in Jammu and Kashmir. There democracy is seen to be admirable in the shadow of the Constitution. But there is a long line of idleness dissidents in secret, like powerless dissidents, who are less prone to peace, more danger in the craving for power. They all want us to criticize, seek evil even in goodness, and also describe the conditions of peace and harmony as turbulent, but they do not present an example of peace, good governance and development.

We make mistakes but do not accept liability. Such a class is once again active on issues related to irony and tragedy for Jammu and Kashmir. They are unable to use their creative power, so they believe in increasing disorganization and unrest on the basis of democratic rights in local body elections.

Even during the peak days of insurgency in this state, not only the parties associated with the secretive government have been running the government in the state by staying connected with the election process, but hundreds of their leaders and activists have been killed in terrorist attacks and these centres at different times.They have also been a part of the government, but it is also very true that they ( Gupkar)have taken the loaves of her political interest by giving an opportunity to thrive terrorism, creating an atmosphere of unrest and blocking development. It is also true that prominent leaders of these parties have been supporting the Indian side of Kashmir on international forums. Even today, they are strongly involved in local elections, not talking about boycotting elections. But these parties are adamant on the demand for the return of Article 370 in the state, if they join the view of Pakistan, how can they be agreed?

Home minister Amit Shah has described these political organizations in Kashmir as criminal gangs or gangs, so there is no exaggeration in this. This is a courageous step, the courage of the Central Government in Kashmir has even removed Article 370, and more than that it has shown maturity by creating conditions to maintain peace and order. In the new situations after the removal of Article 370, the people of Kashmir have breathed a sigh of relief, the absence of unpleasant, violent, terrorist and chaotic situations in the new environment is a sign of faith in the Central Government. . Taking every step in the province with democratic caution and prudence is the need of the hour, whether local bodies elections or political activities of active grouping in them. Now the new round of violence and terror begin in the valley by giving support to wrong and chaotic political parties.

Establishing democratic governance in Kashmir is the biggest priority before the Narendra Modi government. But some selfish politicians and political parties associated with groupism are advocating their own self-motivated parallel ideals, seeing the ideal being established in some corner. That is, just the act of healthy tradition. Tricky display of trickery. Wherever such people are, there is a big obstacle to advanced life and a strong nation. In Kashmir too, such obstructive people are seen abusing democracy. There are some people everywhere we can disagree, but who are difficult to ignore. Instead of walking with a person walking, they stick to him.

The snake bites when the time comes, but the wicked man is always harmful. Kashmir has to be careful with such evil people, leading towards peace, development and co-life. It is certain that not all people in public life are of one ideology, one style and one nature. Therefore, there is a need for honesty towards responsibility, mutual understanding and deep understanding of each other. India is a "mosaic" nation of unity in diversity, where every color, every grain gives a feeling of unity in diversity. If we can develop the militant consciousness in every Kashmiri to set the ideal for local body elections, then surely the idealists will be able to shorten the line of dissidents. And this will be a meaningful effort to overthrow the roots of unrest and terror in Kashmir and to establish peace.