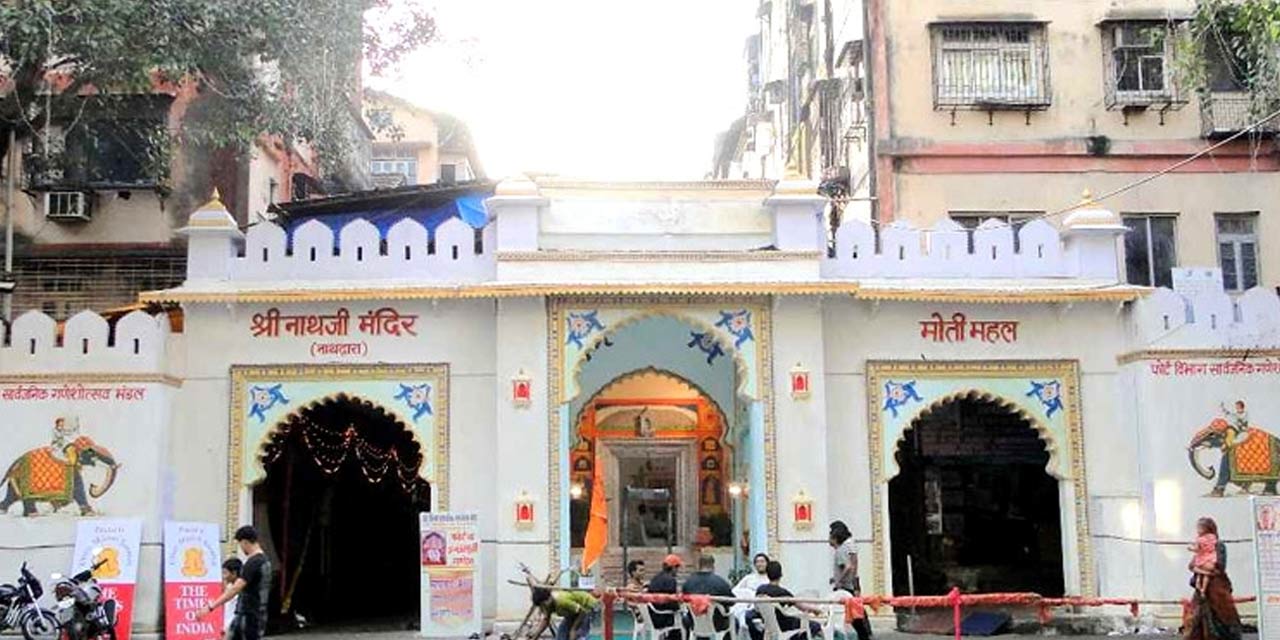 Shri Nathji temple in Nathdwara is reckoned among the country's top most popular temples. It is said that Shri Nathji came here from Gokul, Mathura and Vrindavan. The premise of the temple is very large. In the temple, the statue of Shri Nathji, made with marbel, looks very alluring. The chin of the statue is engraved with a Big diamond. Shri Nathji is beautified differently in three times of the day. For the beautification of Lord, New clothes, embroidered with Gota and stars, are stitched. The stitching work is done at the Nakkarkhana Gate. In the east of Kamaan Chauk of the temple, the devotees can get prasad for Shri Nathji. This prasad tastes very sweet. It is popular in all over country.This temple is Pradhan Peeth of poostimargiya Veshnev communitity. It is about 337 years old.

Moti Mahal Gate of the temple is the main enterance which faces towards Chaupatti which is called the heart throbing centre of Nathdwara. About 100 foot long slope adjoins the chaupatti to the main entrance gate. Then comes a big chauk inside the main enterance which is called Moti Mahal. In the centre of the chauk can be seen a beautiful fountain. Then, we reach Shrilalan passing through the lane of marble from Moti Mahal. Shrilalan is the Balroop of Shri Nathji. Here, we can see the old pictures of Lord Shrinathji in dining place. After the darshan of Shri lalanji, devotees go to Intzaar Chauk for the darshan of Lord Shri Nathji. This Nakkarkhana is adjoined to the main gate.The another entrance gate to Shri Nathji is also called Nakkar Khana. We can see New market at the right side of chaupatti and after this is visible Nakkarkhana. This door is very huge. Several Shanaai Vadaks and Nagada players sit and perform here due to which it is called Nakkar Khana. Shanai and Nagada are played when Shrinathji is unveiled for darshan. This darwaja also faces Intzaar Chauk. The male devotees stand here in this chowk and for female ones, a huge Kamal Chauk, made of marble, is situated near by it.

For the darshan of Lord Shrinathji, another gate is also there which is called "Preetumpol", comperatively smaller than the two. This door is North facing while Moti Mahal and Nakkarkhana are East facing. At the right side of Chaupatti, Preetmpol gate comes in between the way to New market in the West. A narrow way goes directly to Kamal Chauk after entering here. Kamal Chauk and Intzaar Chauk are adjecent to each-other with 20 foot distance between them.They are adjoined by ten long Ladders. At the South-west side of these Chauks, we can rejoice the darshan of Lord Shri Nathji.

Here, Kheva management has been done for darshan due to the lack of place infront of Shri Nathji. About 150 devotees can stand here at a time. Therefore, all are not allowed together. Ladies in Kamal Chauk and Gents in Nakkar Khana Chauk stand and wait. They are sent inside in limited crowd. The devotees, who are sent inside, come under the management which is called Kehva management. Although Lakhs of devotees come here from all round the world yet people of Gujarati community can be seen in huge crowd every time.The huge crowd of devotees gathered mainly during the time of Mangala Arti and Bhog. During arti, darshan of Shrinathji is worth watching. Here, we can join mangla arti from 5.15 to 6.00, Shrangar from 7.15 to 7.30, Raj Bhog from 11.30 to 12.15, Uthapaan from 3.45 to 4.00 , Bhog in evening from 5.15 to 6.00 and Shayan, arti and darshan from 6.45 to 7.15.

The main festival, here, is Shri Krishna Janmashtmi when the temple administration gives salaami with 21 cannons. Here, Diwali is also very popular. On it's second day is celebrated khebura festival. There are many cow-sheds in Nathdwara which includes the cow-shed of Shri Nathji temple also. Here, about 400 cows are kept for care. 48 K.m. away from Udaipur, buses are available all time for Nathdwara.