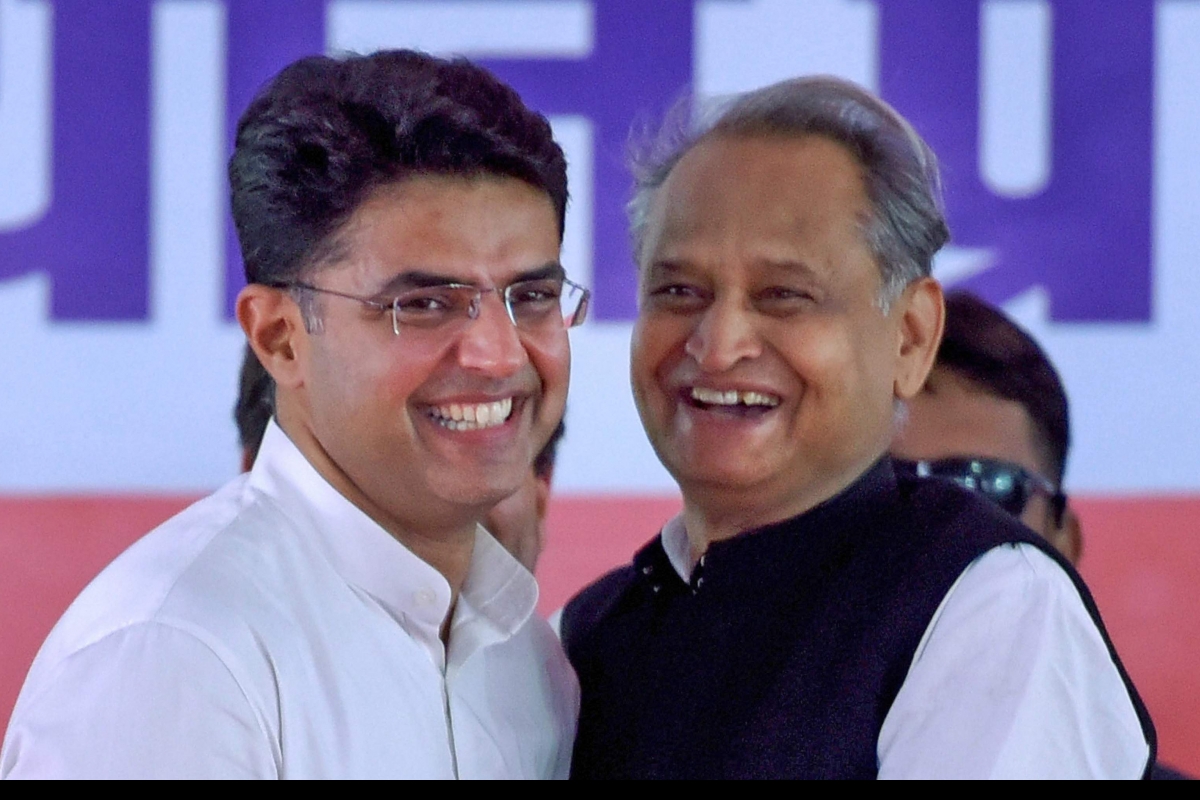 *Now how long the theory of ‘United colours of Rajasthan’ will continue?*

In December 2018 Rahul Gandhi as the national president of the Congress, shared a post on Twitte  with smiling faces of Ashok Gehlot and Sachin Pilot that read ‘United Colours of Rajasthan’. But just within one and half a year, it could not imbibe the colour of unity in the culture of colourful Rajasthan. Entered out of Rajasthan in the politics of the state with a specific purpose, young  leader disseminated it like the petals of a flower. Some people made a big pageantry at Delhi and Jaipur when Gehlot was given priority over Sachin by high command and later on it continued in one or the other way.

This time following the footsteps of Jyotiraditya Sindia, ambitious Sachin revolted in a big way and created a severe political crisis in Rajasthan. Almost for the last one month despite appeasing by party high command he was not pacified, and determined to break the party, but this drama of Sachin group was curtailed down after meeting with Priyanka Gandhi and Rahul Gandhi and on assurance by Sonia Gandhi to form a committee comprised of three members. Similar to the happenings of making Gehlot Chief Minister for the third time, this time also the brother-sister duo of Priyanka and Rahul played a vital role in keeping party intact.

Last time role of senior leaders Ahmed Patel and Bhanwar Jitendra Singh of Alwar remained significant. This time also both of them remained active with K C Venugopal, organizationSecretary of Congress Party . In fact, beating politics of bold political leader Kamal Nath, Ashok Gehlot won the fight. with a long political experience old war horse Gehlot set such a strategy that barring one or two all the legislators of  Sachin group bowed down to Gehlot and his main supporter Bhanwar Lal Sharma, MLA from sardarshar,Churu reached to the Chief Minister’s residence in Jaipur. Gehlot already said that repenting on their mistake if the dissenting legislators return to home on the directive of the high command, there will be no problem to embrace them. Today Sachin group is broken, looks helpless and is forced to return to home. Considered to be the great supporter of Sachin remained attached to Gehlot ever since beginning of the revolt itself. It is a big political win for Gehlot in the game of politics.

After a dilemma at Governor’s House (Raj Bhawan) and with Governor Kalraj Mishra, victory of old warhorse Gehlot now seems eminent on August 14 in the Assembly.Bhartiya Janta Party (BJP) is shocked with the latest development. It utterly shows disappointment of its state president Satish Poonia who had   said that ‘the leader turned out to be a villain who wished to be a hero.’

Upholding the wizardry he inherited from his father, ultimately Ashok Gehlot has once again proved that he has re-established himself more firmly as the real wizard of the politics as compared to past.

Consequent to efforts put in by Priyanka and Rahul, the interim national president of Congress Sonia Gandhi has declared to form a committee of three members to provide with a respectful solution to the issues related to Gehlot and Sachin groups. But. It is yet to be seen that how long the theory of ‘United colours of Rajasthan’ holds good in the time to come after Sachin and his associates return to home.

Nobody could ever think of the way political drama ended up in Rajasthan with the U-Turn of Sachin. Even nobody thought of it. It is highly talked about in the political circles at Delhi. Especially those dreaming of becoming CM and claimed to have overturned the power just within five days would have never imagined how they would satisfy their supremos. In the whole political drama not only dreams of Sachin are shattered but the dreams of other leaders dreaming likewise has also collapsed like a pack of cards.

A lot of speculations continue to grow in the realms of power in Delhi, especially, with regard to the career of Sachin Pilot and forthcoming strategies of Gehlot. The process of freeing the hostages of Congress and BJP legislators before the Independence Day has also begun. Pilot is already back to Jaipur, at the same time Gehlot with his supporters has also return from Jaisalmer.BJP legislators too have reached to Rajasthan from Gujarat.

The month long melodrama is being viewed as a political victory of Congress and defeat of BJP. Party continues to contemplate on strategic defeat received in Rajasthan after being successful in toppling elected Governments in Karnataka and Madhya Pradesh and other states. Top BJP leaders are being blamed for the defeat, and possibly they might have to pay heavily for their faults.

In Congress circles it is a matter of high discussions that after mediation of Priyanka Gandhi and Rahul Gandhi and Sonia Gandhi consenting to form a committee of three members to remove differences between both the groups and resolve issues, whether strained relations between Gehlot and Sachin willed be resolved or not? At the same time will there be any coordination between them?  Will some third leader take advantage of the two groups?

Although everybody agree that in the whole melee Gehlot has emerged as a strong leader and image of Sachin is badly tarnished.

At the same time, the stature of Vasundhara Raje has gone high and those who are trying to find an alternative to her have miserably failed. Surely one good thing has happened that communication between Vasundhara and the top leadership of the party has initiated once again. This might yield good results in the near future.

Public also hopes that after the session of the legislative assembly the Government may resume to work properly.

*Top BJP leadership angry with state leaders: Vasundhara Raje emerges strongly*Simultaneously, it is said that top BJP leadership at the centre is annoyed with leaders holding high positions in Centre and State. According to political sources, a good message has not been rendered across the nation with strategic defeat received in Rajasthan after gaining success by following strategies in Madhya Pradesh, Karntaka and other states, but after allegations of phone tapping and indulgence of a  Union minister in a scam of a Credit Cooperative Society has immensely dented the image of the party, as in last six years none of the minister of Modi Government was stained of corruption. Modi has earned an image of being a strong national leader and he always says that ‘neither I will ever get corrupted or let anyone go corrupt’

According to sources now BJP high command has begun to realize that there is no other strong leader of Vasulndhara Raje’s stature and so only top party leadership is forced to summon her at Delhi to discuss current affairs of state in Rajsthan. During last few days Vasundhara remained active in Delhi. She has clarified her standing after meeting all senior leaders including party president JP Nadda, Union Defence Minister Raj Nath Singh, Union Minister Nitin Gadkari,B. Santosh,general secretary of the organization etc. She has unmasked the leaders who are always indulged in spreading baseless rumours, while dedication and cooperation of her and her family, to RSS and the party has evidently been there since the beginning. Especially, her mother and former Rajmata of Gwalior Vijayaraje Scindia played an important role in bringing up the plant of the party to grow like a gigantic Banyan tree ever since the time of Jansangh.