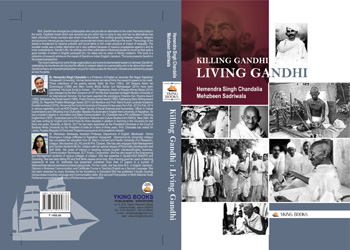 Gandhi has lived for one hundred fifty years and  it is not just a joke that people ask “Have you seen a man living at the age of One hundred and fifty?” Gandhi is a one hundred fifty years old living man. Had it not been so people who spread the hate campaign against him would not have been required to “Kill” him again by shooting at his effigy on the day of his martyrdom? It is immensely ironical that those who call themselves “Hindu” and claim to be the flag bearers of Hindutva take pride in rejoicing on the day of Gandhi’s murder by Nathu Ram Godse, a worker of Rashtriya Swayam Sevak Sangh. They have built temples of Nathu Ram  Godse who killed Gandhi by shooting three bullets on his chest.  Gandhi breathed his last with the words “hey Ram!”

It is no use fighting with such thoughtless people in their language. A fit reply to them is to spread the message of love, non-violence, truth, well being of all and restraint which were the values Gandhi stood for. Killing Gandhi, Living Gandhi , a book edited by Prof. H.S.Chandalia and Dr.Mehzbeen  Sadriwala is a fit reply to the people who are engaged in spreading “Hate Gandhi” Campaign against Gandhi. In the introduction to the book the learned editors have rightly said, “Gandhi was killed by an insane fanatic in 1948 A.D. but those who believe in the philosophy responsible for the murder of Gandhi are so scared that they attempt to kill him again and again. This kind of fundamentalism is perpetrated by individuals and organizations who claim to be nationalist. But no amount of hatred can kill a man and his ideas who preached just love, peace and non- violence. The fit reply to those ‘killing’ Gandhi is ‘living’ Gandhi in all possible ways.”

The book has twenty nine chapters. These chapters explore and identify the impact of Gandhi on Indian Literature in English, Hindi Cinema and also in the socio-political life of the country. There are chapters in which the authors have talked about the presence of Gandhi as a character in the novels like R.K.Narayan’s Waiting for Mahatma, Mulk Raj Anand’s Untouchable and Raja Rao’s Kanthapura. Gandhi had influenced in Indian Cinema also. There are many films in which Gandhian characters have played lead roles. There are songs that include the name and message of Gandhi. More than two chapters examine the presence of Gandhi, his philosophy and thoughts in the world of Hindi cinema. Besides , there is a chapter on the analysis of a Film Manthan which is based on the Cooperative Dairy Movement in Gujarat . It was a cooperative movement of milk producers who not only led the country through White Revolution but also presented a mode of development based on people’s participation. There is an article based on Khwaja Ahmad Abbas’s play Barrister at Law, which is about Gandhi’s experiences in South Africa.

Most important thing in the book is a foreword by the noted author and social activist Padma Shree Dr.Syeda Hameed. She has been a member of the Planning Commission of India for fifteen years before that apex policy making body of the country was replaced by Neeti Aayog. She has commended the book as an important contribution to Literature on Gandhi. The title of the book, its cover and the content is attractive. The book has been published by Yking Books, Jaipur.