Food pipe cancer caused by smoking, a new tube made from the stomach 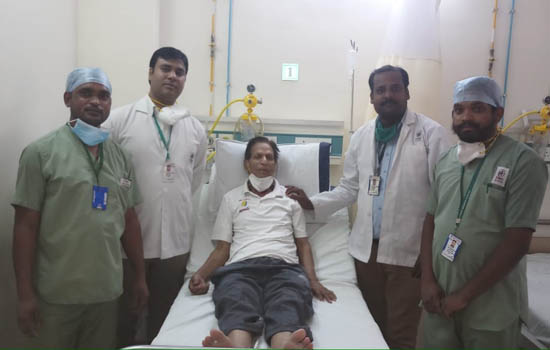 Udaipur. The life of the cancer patients,  caused by long-term smoking in the food pipe was saved by the operation of a telescope in the GBH Memorial Cancer Hospital, by creating a new food tube from the stomach and the patient's life was saved.

The operation of this cancer patient who came during the corona period was also necessary because there was a possibility of cancerous lumps and affecting other organs. Group Director Dr. Anand Jha said that the family of Sector 4 resident Madan Mohan Tamboli had taken the family to Dr. Kuresh Bambora, the Immigration Surgeon of GBH Memorial Cancer Hospital. In the case history, it was found that patients smoke and tobacco for a long time. Due to this, his food pipe was blocked. After investigations and biopsy, it was found that there was this blockage due to the formation of lumps in the food pipe, due to which they were unable to eat or swallow food. This is called ecofagal cancer in medical science.

Dr. Quresh Bambora, on the investigation, found that the patient had become very weak due to the inability to take food. In such a situation, if the knot was not removed by operation, it could have been done on life. At the time of the Corona epidemic, the team, including Dr. Bambora, Dr. Nishi from the Department of Anesthesia, and Dr. Rajnindra, following all the safety parameters of the corona infection, operated the telescope and removed the patient's food pipe and knot. Along with the operation from this telescope, he also constructed a new food pipe from the stomach.

Dr. Bambora said that after this operation, the patient was kept in ICU, and food was started. The patient is now healthy and discharged.