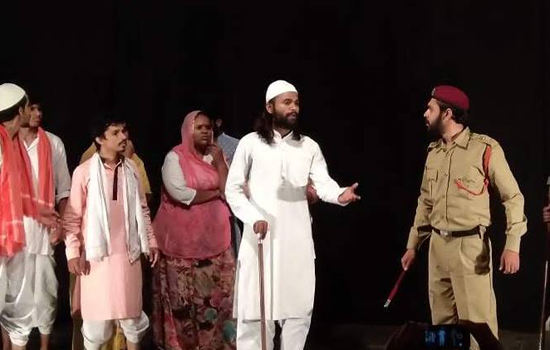 In our school times, we all have read stories Munshi Premchand . He was one of the most renowned writers of Hindi literature and first Hindi novelist to feature realism in his work. His writings vividly depicted the life of Indian people at the eve of independence and the true face of society at that time. His work even spoke on social issues like child widowhood, prostitution and poverty.

To give tribute to the well know journalist cum writer, Natyansh Society of Dramatic and Performing Arts celebrated Munshi Premchan Jayanti by staging four stories. On the pre eve of Jayanti story ‘Panch Parmeshwar’ was performed at Deendayal Upadhyay Sabhagaar, MLSU. This program was organised in collaboration with Department of Hindi MLSU. The story was presented by Agatsya Hardik Nagda, Mohammed Rizwan and Rekha Sisodia while Raghav Gurjargour, Chakshu Singh Rupawat and Harshul Pandya supported in backstage work. Students, scholars and faculty members attended the program and were mesmerized by the art of storytelling. Dr. Ashish Sisodia (HOD – Hindi Dept.) said “It is first time in 15 years that department has organised such wonderful program. The story is part of our syllabus and I believe that students would have definitely benefitted from it”. Dignities who attended program were Prof. Sadhna Kothar (Head – College of Social Science and Humanities), Dr. Rajkumar Vyas, Dr. Nitu Parihar and faculties from Urdu and English department.

On the eve of Premchand Jayanti (31st July) Natyansh presented 3 stories viz., Bade Bhaisahab, Actress and Juloos. The event started with the story ‘Bade Bhaisahab’, a glimpse into the life of two brothers. The younger one, who is also the narrator of his story, tells the audience how he, instead of abiding by his brother’s instruction, gets lured by the fascinating world outside and hence ended up getting scolded by his brother. Though the scolding never worked on his carefree demeanor but suddenly one day it did. His brother’s words of love and anger did ultimately change his life. It was a mind absorbing yet subtly written story presented proficiently by Raghav Gurjargour.

The event then moved to its next performance of the story called ‘Actress’.  ‘Love is true but true and false cannot exist together.’ The story was of an attractive middle aged actress, Tarabai, who falls in profound love of prince Nirmal kant. Though later she realised she is not right for the prince, that her beauty is just a pretence and which eventually leads her to the path of renunciation. Rekha Sisodia presented the this story with grace and emotion

The last performance of the evening was a short play based on story called, ‘Juloos’. The play aimed at giving the audience a peek into the struggle of independence. The story portrayed an anti-violent procession led by Ibrahim Ali who is unintentionally killed by an Indian inspector working under British. When ridiculed by society and his own wife, he feels extreme regret and shows contrition for his crime. Directed by Rekha Sisodia, the cast includes Mahesh Joshi as Ibrahim Ali, Isha Jain as wife of Ibrahim Ali Agatsya Hardik Nagda as Daroga Birbal Singh, Rekha Sisodia as Mitthan Bai, Mohammed Rizwan as Dindayal, Raghav Gurjargour as Maiku, Chakshu Singh Rupawat as Shabhunath, Anshul Paliwal and Harsul Pandya as Sipahi, Piyush Gurunani, Saloni Patel and Niti Sharma as protesters. Rahul Solanki gave music of to the play and lights were operated by Amit Shrimali.

The aura of storytelling was gradually brought towards its end as the team interacted with the audience. The event not only involved the huge amount of hard work on stage but a lot of intellectual dedication to outline a well themed program. The artists spent weeks reading almost every bit of munshi ji’s stories to bring out those which reach the hearts of audience in the best way possible and show them every colour of the great novelist’s writing style. The show was also aimed to let young artists as well as the audience know the treasures of literature we possess.


Source :
This Article/News is also avaliable in following categories : Udaipur Plus
Your Comments ! Share Your Openion