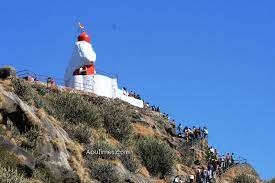 The Dattatreya temple is a temple dedicated to Guru Dattatreya, located on Guru Shikhar, the highest mountain peak in Mount Abu. The view from the top is gorgeous. The joy of the experience is doubled by the thrill of recognizing the various landmarks around the place from the top. No words can adequately describe the sense of achievement and the feeling of peace that one feels on climbing this peak. It is believed that Guru Dattatreya was an incarnation of the divine trinity of Lord Brahma, Lord Vishnu and Lord Shiva. The temple is of White colour. It is believed to house the foot prints of Dattatreya and devotees feel blessed by darshan of these footprints. Within the temple can be seen the footprints of Swami Ramnath also, the seer who enshrined the statue in the Raghunathji temple in Mount Abu. After reaching the peak, at a little distance to the north west, we can also see a temple dedicated to Ahilya, who was Dattatreya's mother. On the peak, there is a huge bronze bell with inscription 1411 A.D. The sound of the bell is carried to a long distance and is very captivating. Dattatreya is also called "Shri Guru Devdetta" due to the assortion of both God and Guru in him. The historical cave still persists here where Dattatreya had done Typysaya for long. His "Trishool" and "Padooka" with Shivlinga can still be seen here. This place is 15 k.m. away from Mount Abu. Devotees have to cross through a long curved ways to reach here. Along with this temple are other temples also on the mountain, like Shiv Mandir, Meera mandir and Chamoondi mandir. Historically speaking, King Prithviraj Chouhan is believed to have travelled along this peak to meet his bride and consummate his marriage with her. The bride was the princess of Prahladanpur, now known as Palanpur. Mount Abu observatory is located nearby and can be sighted from the peak of Guru Shikhar.The tourists can enjoy the natural surroundings of Aravali hills. The local artistic stuffs, sold by a number of shops here, also entice the tourists to buy them and keep them as an unforgettable memories of Guru Shikhar.