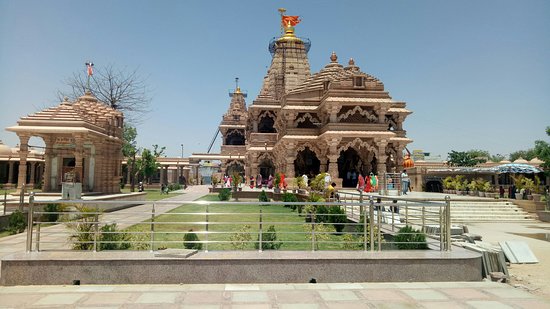 The Sanwaliaji temple of the Dark Krishna is situated on the Chittorgarh – Udaipur Highway, at the town of Mandaphia, about 150 Km. from Udaipur and 40 Km. from Chittorgarh. The temple is the prime centre of religious faith and devotion of the pilgrims. The architectural beauty of the temple in Mandaphiya is breath-taking. The majestic carvings on pillars and alluring arts of statues remind us the magnificent temples of Puri, Delwara and Ranakpura which are the best examples of artistic skills of the then workers. Due to all this, all devotees flock the place with great fervor and devotion for Sanwaliya Seth.

According to the legends, in the year 1840, a milkman named Bholaram Gurjar dreamt of 3 divine statues buried under the ground in the chapar village of Bhadsoda – Bagund. When the villagers started digging the place, they found the three statues, exactly as Bholaram saw in his dream. They were the statues of Lord Krishna – all of them beautiful and mesmerizing. It is said that these statues were related with Meera Bai who was the great worshipper of Lord Krishna. As says the legends, Sanwaliaji is the same Girdhar Gopal of Meera Bai whom she would worship. She would roam here and there with these statues accompaning the saints and sages. Dayaram was also such a saint who used to keep these statues with him. It is said that when Mugal troops of Aurangzab had been attacking on temples and destroying them, they came to know of these statues and tried to get them. Then, Dayarama had hid the statues under a tree by digging a dip pit on the ground. With the passage of time, Dayaram passed away and this same place came into the dreams of the milkman Bholaram.

One of the statues was taken to Mandaphiya, one to Bhadsoda and the third remained at the very place where it was found. All three locations became temples. But the main temple is of Mandaphiya which is popularly known as Krishna dham. This is 40 K.m. away from Chittorgarh and 83 K.m. from Udaipur. The second temple, that is Bhadsoda – Bagund, is also known as Prakatya mandir and the third one is in Bhadsoda town which is the oldest temple and is popularly known as Sanwaliya Sethji Ka Mandir due to the biggest idol of Krishna which was brought here and established in the temple. This temple is second to Shri Nathadwara to the followers of the Vaishnav Sect.The three temples of Sanwaliya Ji became renowned and devotees visit them in large number every day as they believe that all their desires are fulfilled when they visit Shri Sanwaliya Seth's Darbar.