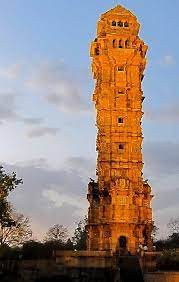 Kirti Stambha is a 12th Century tower situated at Chittorgarh fort. The 22 metre high tower was built by a Jain merchant Jeeja Bhagerwala during the reign of Rawal Kumar Singh (C. 1179-1191) for the glory of Jainism. The tower is built in the "Solanki" style. It is 30 feet wide at the base and narrows down to 15 feet at the top.This magnificent stambha has been the prime center of attraction for tourists. The carved sculptures on the tower have a magnetic attraction in them which charms the visitors. Inside the tower, there are several rounded steps to go up. The tower is dedicated to the first Jain Teerthankar "Adinath". The stambha is engraved with many Jain statues, different incarnation of Lord Vishnu, Shiva, Brahma, Laxmi narayan, Savitri, Harihur and other such sculptures related to Ramayana and Mahabharta. Each statue has been carved with it's name downwards or upawards. The tower is an excellent example of analysing the expressions of different statues. We can see a Mandap based on 12 pillars on upper floor. Downwards are carved the magnificent statues of four Jain teerthankers in four directions. The upper floor has been well decorated and carved with hundreds of images of human beings. Near the tower is erected yet another Jain temple, built during 14th Century. We can see mandap and womb house (Garbha gruha) in the temple. The outer part of the temple is intricated with fine carvings on statues. Jain temple of Satbees deviyan is also a great example of majestic architecture which entices the devotees to come here and enjoy the peaceful ambience of the temple.