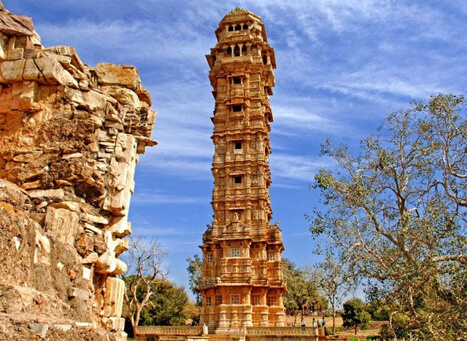 (Tower of Victory) or Jaya Stambha, called the symbol of Chittor, was erected by Rana Kumbha between 1458 and 1468 to commemorate his victory over Mahmud Shah Khalji, the Sultan of Malwa, in 1440 A.D. Built over a period of ten years, it raises 37.2 metres over a 47 square feet base in nine stories accessed through a narrow circular staircase of 157 steps up to the 8th floor, from where there is good view of the plains and the new town of Chittor. It is dedicated to Lord Vishnu and has intricate carvings and sculptures of Hindu Gods and Goddesses. The internal part of the tower has carvings of weapons, musical instruments, and other tools used in that period. It is an excellent example of religious pluarism practised by the Rajputs. The highest story consists of an image of the Jain Goddess, Padmavati also, the word Allah is carved nine times on the third story and eight times on the eight story, all in Arabic. The magnificent tower is called the "Dictionary of sculptures" which is frequented by tourists visiting the city and makes them feel proud of the vibrant history of the country.