Significance of Yoga against Corona 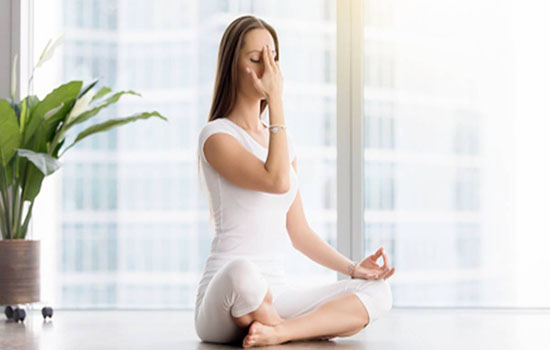 Yoga plays a special role to fight against corona pandemic. In the world suffering from corona pandemic; yoga is the greatest need of this present situation because regular yoga increases immunity. While the corona attacks the respiratory system, yoga acts to strengthen the respiratory system through breathing exercises. Practicing ‘Pranayama’ helps us to fight against corona. People's lives should be yogic; this can reduce the outbreak of corona.

Recently, Prime Minister Shri Narendra Modi said that Yoga is most important to fight against Corona. This time due to the epidemic of coronavirus, the United Nations had kept the theme of International Yoga Day as 'Yoga for Health, Yoga from Home'. The utility and relevance of yoga is increasing worldwide due to the increasing outbreak of the Corona epidemic. New research and miraculous yoga effects are coming out all over the world. Yoga has an important role not only in the corona epidemic but also in happiness, peace, concentration and maintaining balance in life.

Recently, researchers from France's Clermont Avenger University compared the converged people through yoga in their new research to other workers, so there were quite interesting results. In a research paper published in the research journal named ‘Plus One’, these scientists have said that the meaning of time changes for those who are concentrated. This research and its findings have once again highlighted the usefulness and relevance of Indian Yoga. Yoga has become a light in the corona epidemic, the increasing speed of the corona is pushing humans towards unrest, imbalance, stress, fatigue and irritability, leading to disorganization, increasing diseases and weakening the ability to fight them.

To keep life healthy and energetic, yoga is a panacea medicine that keeps the mind cool and the body fit. The pace of life can be given a musical pace with yoga.There are many benefits of meditation in Indian yoga. Many of these things have been accepted by science as well. More than one research in neuroscience has repeatedly shown that meditation reduces stress, increases efficiency and concentration, develops the ability to fight against diseases, which increases the brain and its productivity. The focus of concentrating and meditating is quite common these days in Western countries, where it is called Mindfulness.

Its basic concept is also similar to that of Indian Yoga, which says that whatever you do, do it in a concentrated manner and remain in your present while doing any work. There is a lot of research on this mindfulness around the world right now. The ability of our confidence and concentration lies in us. We are the best judges for ourselves.We know our abilities and flaws; when we are determined and focused in any work only we need one thing that is a balanced mind. Therefore, Yoga is not only a means of freedom from pandemic like corona, peace and balanced life but it also makes us a means of producing remarkable results and positive thinking in our field.

An interesting thing has also emerged from this research of France that meditation is a more effective and soothing way than music, to get concentration, to remove boredom, while meditation and yoga are often considered as dull things. While the results of this experiment are seen going completely opposite. Scientists have also tried to explain it in other ways. He says that when you have to fight a crisis like corona, do many things and get entangled in it throughout the day, you don't have the time to think about many other things.

Scientists also came to the conclusion that the more the experience of meditation, the more time-wise its refinement is, the more able they are to adapt their time. This research of these French scientists has also become a powerful medium to make Indian yoga iconic in common life. It also says a lot about our ascetics and yogis, who go to the mountains and forests and do spiritual practice for many years. Here, we do not spend time amidst the restrictions of Corona, and we are always looking for ways to protect ourselves from boredom, while they meditate there even in solitude for a worry-free and long-term.

Certainly, this new research from France will become an undertaking to make yoga and meditation a lifestyle of people all over the world. Seeing the benefits of yoga, everyone is seen adopting it in their runaway life and corona catastrophe. Gradually people are realizing that by doing yoga, not only can the biggest diseases be overcome, but also happiness can be brought in their lives, life can be balanced, working abilities can be increased, and peace can be established.

Every person is ill due to scientific progress, industrial revolution, increasing population, urbanization and the stressful environment of modern life, apart from this, the epidemic of Corona is a matter of concern not for any one nation but for the whole world. Today, every area of life is surrounded by problems. Extreme stress / pressure are being felt in daily life. Every man is living a life of suspicion, conflict and mental turmoil. Mental balance is getting disturbed. Concentration and mental balance means to establish synergy in different situations arising from the corona, whose only powerful and effective means is yoga.

Actually yoga is the experimental or practical form of religion. Traditional religion binds people with pegs and yoga shows the path of liberation from all kinds of pegs. That is why in my view; yoga should be the lifestyle of humanity. This is a powerful means to make a man complete. Yoga is the nectar of life in order to make every person aware of it and to motivate every person to look inside, which creates the urge to become a yogi and good human being.

Yoga is a means of controlling the anomalies of human life. A person's way of life, approach to life, style of living - all these are governed by his thoughts and behavior. In the blind race of modernity, in an attempt to move with each other, man is forgetting his actual way of living, eating, talking and all ways of living. This is the reason; he is falling prey to the mental / emotional pressures of untimely. Due to disturbances in mental balance, physical disorders also start their effect. The more economic prosperity has increased, the more convenient resources have developed, the more burdensome life has become. The roots of human development have been shaken by an endless series of stresses / pressures associated with the corona. Yoga is the only medium that can employ and concentrate the imbalance of life, increase immunity, and can transmit new energy to the lethargic life.