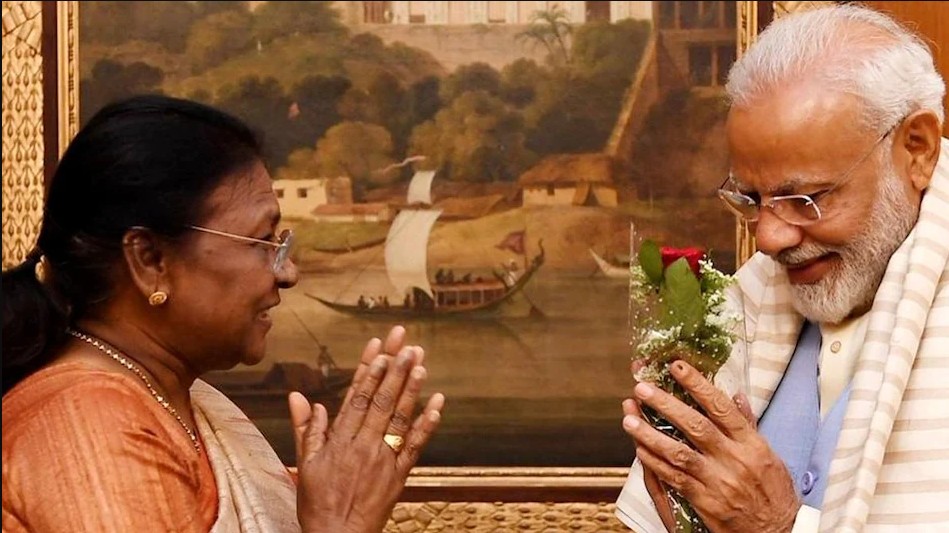 Draupadi Murmu has been declared by the Bharatiya Janata Party as its presidential candidate for the fifteenth presidential election 2022, which shows good political skills and maturity. She is a tribal representative who will be the first tribal to reach the highest constitutional post and the second woman President of the Republic of India, which will give new strength to the democracy of India, along with the world. India is also changing rapidly. A new political vision, a new political environment is taking shape in the all-pervading turmoil, in this era, with Draupadi Murmu becoming the President, not only the dignity of this highest constitutional post will get a new record, but the national existence and identity will also be strengthened. Because her image has been that of a knowledgeable and soft-spoken politician of settled democratic traditions.

It is hoped that her presence as the constitutional head of the country will reassure every Indian, especially women, tribal for their peaceful and safe life. Only the tribal can feel the pain of the tribal - that is, the pain of the reality that has been experienced. It is no surprise, in my view, that Draupadi Murmu emerged as the greatest female representative to raise the voice of the tribal’s and the oppressed in today's world. Former Prime Minister Atal Bihari Vajpayee had sent a Muslim APJ Abdul Kalam to Rashtrapati Bhavan and now Narendra Modi is consecrating first a Dalit, Ramnath Kovind and then Draupadi Murmu, a Scheduled Tribe, to the highest post of the executive, which is certainly a healthy& progressive decision.

The credit for the presentation of Draupadi Murmu as a brilliant and historic presidential candidate goes to Prime Minister Narendra Modi and BJP President J.P. Nadda's strategy. Murmu's nomination is only sharpening the edge of lower class politics on which BJP has been working hard for a long time. The neglect of the tribal community across the country has been in discussion since independence, Modi has been active since the beginning for the interest and welfare of the tribals, affecting about 11 percent of the total electorate and about 25 percent of the total voter turnout. Particularly, the BJP, comprising Narendra Modi, Amit Shah and Nadda, is giving special attention to the tribal community so that it can bring itself out of the limited identity of the urban party. When the names of presidential candidates were being discussed, I was hoping to get some names from the tribal community itself. Murmu was on top of them. Certainly, having a tribal woman in Rashtrapati Bhavan will enhance the image of BJP among the tribal community, whose direct impact can be seen in states like West Bengal, Odisha, Jharkhand, Gujarat.

Narendra Modi has not only stunned, surprised, but has been doing miracles with his decisions, the same has been done by announcing the name of Draupadi Murmu. Because many targets have been hit with this one arrow. The BJP has been struggling hard in these states due to the presence of very powerful regional parties like Mamata Banerjee's Trinamool Congress in West Bengal, BJD in Odisha and Jharkhand Mukti Morcha in Jharkhand. Whereas in these three states the dominance of Congress is negligible. In such a situation, by sending Draupadi Murmu to Rashtrapati Bhavan, BJP will not only be able to ease its fight, but will also be successful in making its place in these states. The elections are in front of Gujrat, there is also a tribal community in abundance, the effect of this decision will be seen there as well. On the other hand, for the Rashtriya Swayamsevak Sangh, its fight against the conversion of a large number of tribals on behalf of Christian missionaries may also become easier now.

BJP has been showing efficient and mature politics in these years. His leadership, while showing strategic acumen, made a man from a caste-backward background as the Prime Minister, first from a Dalit background as the President and now by declaring a tribal woman as the Presidential candidate. The meaning of bulge has changed. It has been given the name of social harmony, after a tribal politician becomes the President, there will be justice for the tribal and backward classes, it is believed.

It is wrong to say that the President in India is only an office of symbolic importance. Coming from a Dalit background, President K. R. Narayan took a tough stand on the communal violence in Gujarat in 2002, forcing the then state government to change its stand on some matters, while President Giani Zail Singh, who came from a backward background, stunned the intoxicated Rajiv Gandhi government with a thumping majority. The issues were blown away. Ramnath Kovind also strengthened the democracy of the country with his decisions taken from time to time. There is ample possibility that Draupadi Murmu will be elected as the President and after taking oath of this office, she will also display the same determination and make her tenure memorable for the country, which is free from terror, free from scams, inflation and free from communalism. In which Dalit, Adivasi and Backward Classes should get an egalitarian and fair lifestyle of living.

Being a candidate from a simple family to the highest office of the country is a testimony to the glory of Indian democracy. Nothing could be better than being Draupadi Murmu's candidate as President and marching towards getting elected is an inspiration to crores of people with similar backgrounds. This will not only give more strength to Indian democracy, but will also increase its fame. There is no doubt that Draupadi Murmu has been an ordinary politician, but India has a history that ordinary people have done 'extraordinary' things.

Draupadi Murmu was born on 20 June 1958 in Baidposi village of Mayurganj district of Odisha. His father's name is Biranchi Narayan Tudu. They belong to the tribal ethnic group, the Santhals. She graduated from Rama Devi Women's College. After this Draupadi started the job from the State Secretariat of Odisha. She is married to Shyam Charan Murmu. In 1997, she became a local councillor for the first time by winning the election of the Nagar Panchayat for the first time. Three years later, he got the opportunity to become an MLA from the same constituency of Rairangpur, first in 2000, and then a minister in the BJP-BJD government twice. In 2015, she was made the first woman governor of Jharkhand. Former President V.V. Giri was also born in Odisha, but he was originally from Andhra Pradesh.

Murmu's life witnessed many crises and struggles, which shows her vitality. Apart from being a widow in her youth, she did not break even with the death of two sons. During this, she continued to encourage the whole family including her only daughter Itishree. Her eyes moistened when she was being administered oath as the Governor of Jharkhand. She is an ideal and courageous woman of religious rites. There is a special influence of Indian culture and rituals in them. Two days before the announcement of the name of her presidential candidate, she went to a cowshed in Rairangpur which is in law's town of my son Gaurav Garg while feeding the cows there, and told the operators there that you pray for me. Perhaps she had some hope and possibility that her name might be announced and fortunately Gaumata heard the call of her heart.

Today, the fire of communal hatred is being deliberately fuelled in the country. All kinds of crises are being created; it is a great irony of democracy that heads are counted here, not brains. Our democracy is suffering because of this, it has been suffering. More heads are coming, not the brain. There are more masks of caste, religion and class and less faces of humanity. By deceitful use of intelligence, they create a maze of equations, from which Abhimanyu did not learn to get out. In fact, the people who drive democracy need such training so that a new definition of democracy can be rewritten. This vision made Draupadi Murmu's role not only important but also decisive. Therefore, by placing this burden on Draupadi Murmu, the country wants to assure that the governance of the Constitution from Arunachal Pradesh to West Bengal; it will run uninterrupted and the country's borders will be completely safe because the President is the Supreme Commander of the armies. This will be the first time in the history of India that the dignity of the office of a tribal woman will be increased by placing her as the President.