Discrimination Based on Religion more in Cities than in Villages : Prof Kundu 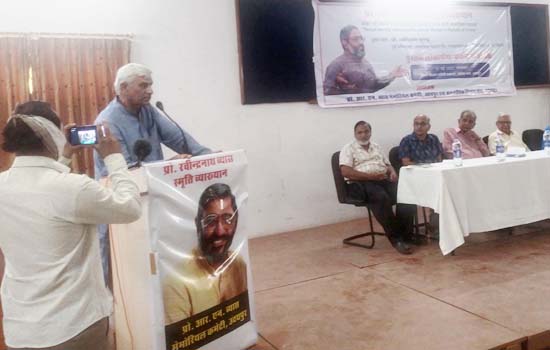 Discrimination based on religion is much more in cities than in villages. The discrimination based on caste , particularly against scheduled castes is more in villages than in cities. However discrimination based on gender is there in villages as well as cities  This was stated by Prof. Amitabh Kundu, former Dean School of Social Sciences , Jawahar lal Nehru University, New Delhi. He was speaking as the key speaker in the First Prof. Ravindra Nath Vyas Memorial Lecture organized on 10th May, 2022 in the meeting hall of Vigyan Samiti, Ashok Nagar, Udaipur. He was speaking on the topic “The Effect of Social Identities on Labour Market in the hours of Crisis.” He referred the data of the government of India and stated that during Covid-19 period the people of Scheduled Castes, Scheduled Tribes, Muslims and Women faced maximum discrimination in job opportunities, wages and income. The report  based on his research called India Discrimination Report is shortly going to be published. Dr. Alok Mishra, Professor at Central University of Hyderabad and son – in –law of Prof. R. N.Vyas introduced the key speaker Prof. Amitabh Kundu.
Prof. Amitabh Kundu who had been a teacher of Prof. R.N.Vyas at Jawahar Lal Nehru University became very emotional as he remembered his pupil. He said that in last thirty years he had visited Udaipur several times but for the first time he is in Udaipur in the absence of Ravi, as he called Prof. Vyas. He recalled the lines of 17th century British poet John Donne who said :
Ask not for whom the bell tolls
It tolls for me.
He said that when someone near us dies, we also die. A part of us also is lost.  He quoted lines from a poem written by Urdu poet Nida Fazli in which the poet says that “the news of your death is a lie, you cannot die.  … We are imprisoned in your memories, you are alive in us.”
The chairperson of the programme  Shri Ajay Mehta, President Vidyabhavan  Society  and former  member of  Indian Civil Services  said that Prof. Ravindra Nath Vyas might have been a communist but he had all the virtues of a Gandhian. His simplicity, courage, straightforwardness and commitment to justice are basically Gandhian values.  Prof. Arun Chaturvedi, former head of the department of Political Science, M.L. Sukhadia University , Udaipur said that Prof. Vyas was a committed teacher and would not accept anything which he thought was wrong and opposed to the interests of academics. He would stand up and oppose then and there. Prof. Zenab Banu, professor of Political Science said that during Dawoodi Bohra Reform Movement Prof. Vyas participated and helped in the movement. She said that she shared the same ideology which brought them close. A book containing memoirs related to Prof. Vyas and also some of his pictures was released by the guests. Prof. Sudha Chaudhary, Dr. Pramila Singhvi and Dr. Iti Vyas are the editors of the book.
In the beginning of the programme Shankar Lal Chaudhary, President of Prof. Ravindra Nath Vyas Memorial Committee welcomed the guests. He said that the committee will carry forward the ideals of Prof. Vyas through various activities. He  said that the memorial lecture will be organized every year. Several professors, political activists and  social workers participated in the programme. Dr. R.M. Lodha, Dr. Naresh Bhargava, R.S.Rathore, Additional Commissioner of TAD Dr. V.C. Garg , Dr. Premlata Swarnkar, Rajesh Singhvi, district secretary of CPIM, Hmmat Changwal CPI, State President of Janata Dal  ( Secular) Arjun Daitha senior journalist Himmat Seth, Well known story writer and Principal of Arts and Commerce College, Kapadvanj, Gujarat Dr. Gopal Sahar , comrade D.S.Paliwal, Dr. Tarana Parveen , well known poet Abid Adeeb and many other well known people expressed their views. The programme was convened by Prof. H.S.Chandalia, student of Prof. R.N.Vyas convened the programme. Dr. Chandra Dev Ola , district secretary CPIML and student of Prof. Vyas offered a vote of thanks .

Launch of Alyque Padamsee's Book Let Me Hijack Your Mind