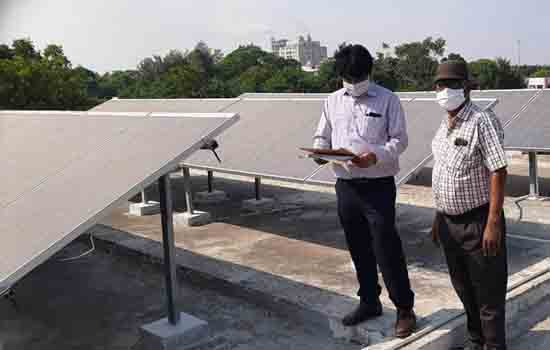 A Raja Rammohun Roy Library Foundation (RRRLF) funded Solar Plant project, the green Kota Government Divisional Public library is transforming the way library as a convening space adapts to clean energy in Kota Rajasthan in India and is geared to mentor other Public libraries to adopt the ‘green way’.

In 2018, Department of Language and Library (DLL), Government of Rajasthan, Jaipur has been invited proposal for Solar Plant and instantly we have prepared Proposal and seeded it to RRRLF Via Department of Language and library Recommendations. After long correspondence, finally we receive grant in Feb. 2020. But again by the interference of COVID-19, work is delayed 3 months, Now in beginning of July Month we get Successes. Now our acting as a green and eco-friendly People’s Library as per the mandate of UN’s SDG7, ‘to afford and generate clean and renewable energy’.

GDPL Kota’s work as one of Kota Region’s only green Public libraries has reached international shores. In this green initiative there are two systems, one is ON Grid (15KW) and another one is OFF Grid (KW), in ON Grid Electricity Generation has been directly transferred to electricity distribution companies of India (DISCOMs) and whatever we consumed has been minus in Generation. Extra Consumptions against Generation will be charged but if it is less than only fixed charges will be recovered. On the other hand OFF Grid will help during POWER failure. Now the library is generating Average 60 Unit per day.

Dr. Deepak  Kumar Shrivastava, INELI South Asia Mentor and Divisional Public Librarian Govt Divisional Public Library Kota explains the various innovations developed to help them achieve SDG7, such as building a distributed generation model for electricity (the first time for a library in a Kota Region), the development of ON Grid and OFF Grid Solar Systems.

Dr Shrivastava further explains how energy demand will grow by 30 percent across India in the next three years, but will be plagued with severe infrastructure issues. The Kota Public Library believes substantial migration is possible by using renewable sources integrated with new technologies, a path it has chosen to tread and into which it aims to usher in others.

He also explained that prior to Renewable energy our almost Office Expanse (OE) fund has been occupied by paying Electricity bill and even then many times we have overdraft but the Problem is resolved but request to govt specially DISCOM’s to remove charging Fixed charges.