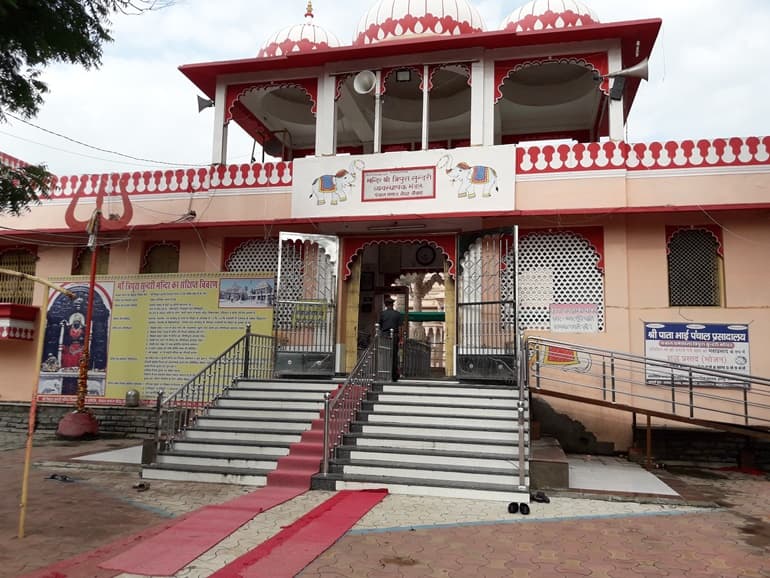 Tripura Sundari temple in Rajasthan is regarded as one of the 108 Shakti Peethas in India. It is situated about 20 k.m. away from Banswara near Talwara Village. Tripura Sundari is called as Turtia Mata by the local people. The rulers of Gujarat, Malva and Marwar were the staunch worshippers of Tripura Sundari. This Goddess was the presiding deity of Siddh Raj Jai Singh, the Solanki ruler of Gujarat. It is said that Malva ruler Parmar had cut his head and offered to the deity. That time Mata rani had given new life to Jagdev after being worshipped by Siddh Raj.

According to mythology, Lord Vishnu cut the body of Goddess Sati into pieces by his Sudarshna Chakra. These parts fell at different places which are known as Shakti Peethas. It is believed that the right foot of Sati fell at Matabari. Situated a top a small hillock, the temple has a square type sanctum of the typical Bengali-hut style construction with a conical dome. The shrine was constructed by Maharaja Dhanya Manikya Debbarma in 1501 A.D. We can see two identieal image of the same deity inside the temple. One is chhotima which is around 2 feet in height and the other Tripura Sundari which is of 5 feet. This temple is also known as Kurma Pith because the shape of the temple is similar to that of tortoise (Kurma means tortoise).The Goddess with eighteen arms, seen inside the sanctum on a lion statue, is really breath-taking. The idol is made of reddish black kastic Pathar. Shri Yantra is built at her feet. Tripura Sundari is so called because she is seen in her three different forms such as that of a lion, peacock and seated on a lotus, and appears as Kumarika, a young girl in the morning; as an attractive young-maid in the mid-day, and an adult woman in the evening. The backdrop of the main shrine is carved with wonderful images of nine Durgas. At the back side of the temple was the idol of Treedev, in south Kali mata and in North was the shrine of Sarswati with eight arms which have vanished now. Only their remnants and ruins echo the place. Here, many popular stories of the leela, done by Devi, can be heard.

This temple has been the prime center of worship for many sages since many years. The place is flocked by thousands of devotees every year, especially on Navratra when special programs are celebrated for nine days with great fervor and enthusiasm. Beautiful and well Jewelled Jhankies of Devi are worth-watching. During these days, the devotees are completely merged with Bhajans, Kirtans, Sadhna, Tup-Jup and Jagrans. On the first day of Navratra, Ghut Sthapna is done in morning and "Akhund Jyot" is lighted near it. Devotees can join Arti in temple throughout the 365 days of the year.

Ashwin Navratri Parv, Kartiki Purnima, Shukla Paksh Asthmi and Shravan mass are some of the notable events at the temple. The temple opens at 5:00 A.M. during summer and at 5.30 A.M. during winter. The temple has a lot of other facilities including, gardens for children, and rooms for accomodation etc. The scenery of the temple is very tranquil, elegant, awakened and worth for sightseeing. Sitting before the spiritual shrine of the great beauty, the devotees get engrossed endlessly for unknown time. The place is worth-visiting.