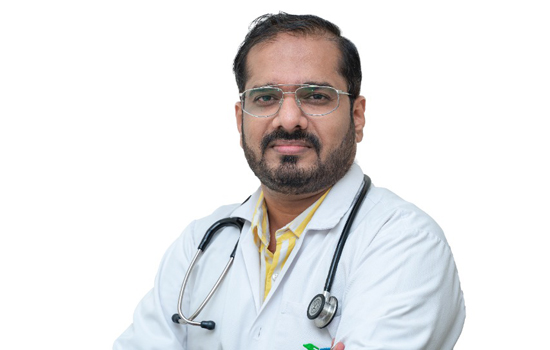 Udaipur: Generally, pregnancy is of 40 weeks, but recently a pre-mature delivery of a child took place at 26 weeks, 3 months before the due date at Paras Hospital, Udaipur. The weight of the newborn during birth was only 700 grams and due to pre-maturity, the newborn had birth asphyxia in which oxygen was not able to reach the brain of the child and the child was having difficulty in breathing.

Dr. Ashish Chandrakant Thite, Consultant, Pediatric and Neonatal Intensivist, Paras Hospital, said that it is difficult for babies below 28 weeks of pregnancy to survive outside the mother's womb. To save the child's life, he was immediately put on ventilator support and the child was kept on ventilator for about 8 days. To bring the breathing under control, the child was ventilated for 30 days by a constant pressure air pump and a high flow nasal cannula was also installed.

Dr. Rajkumar Bishnoi told that the baby had several diseases which are mostly seen in pre-mature babies like severe apnea, anemia, RDS, sepsis, feed intolerance, ROP (eye problem) in which the baby's eye The retina was not fully developed and the lungs were also not fully developed. The newborn was well cared for and kept under constant observation with the help of the expert staff of the NICU of Paras Hospital. After being kept in NICU for 80 days, after gaining about 2 kg weight and taking care of all complications, the baby was discharged from the hospital in normal condition. Paras Hospital, Udaipur is always committed to the care of mother and child. .