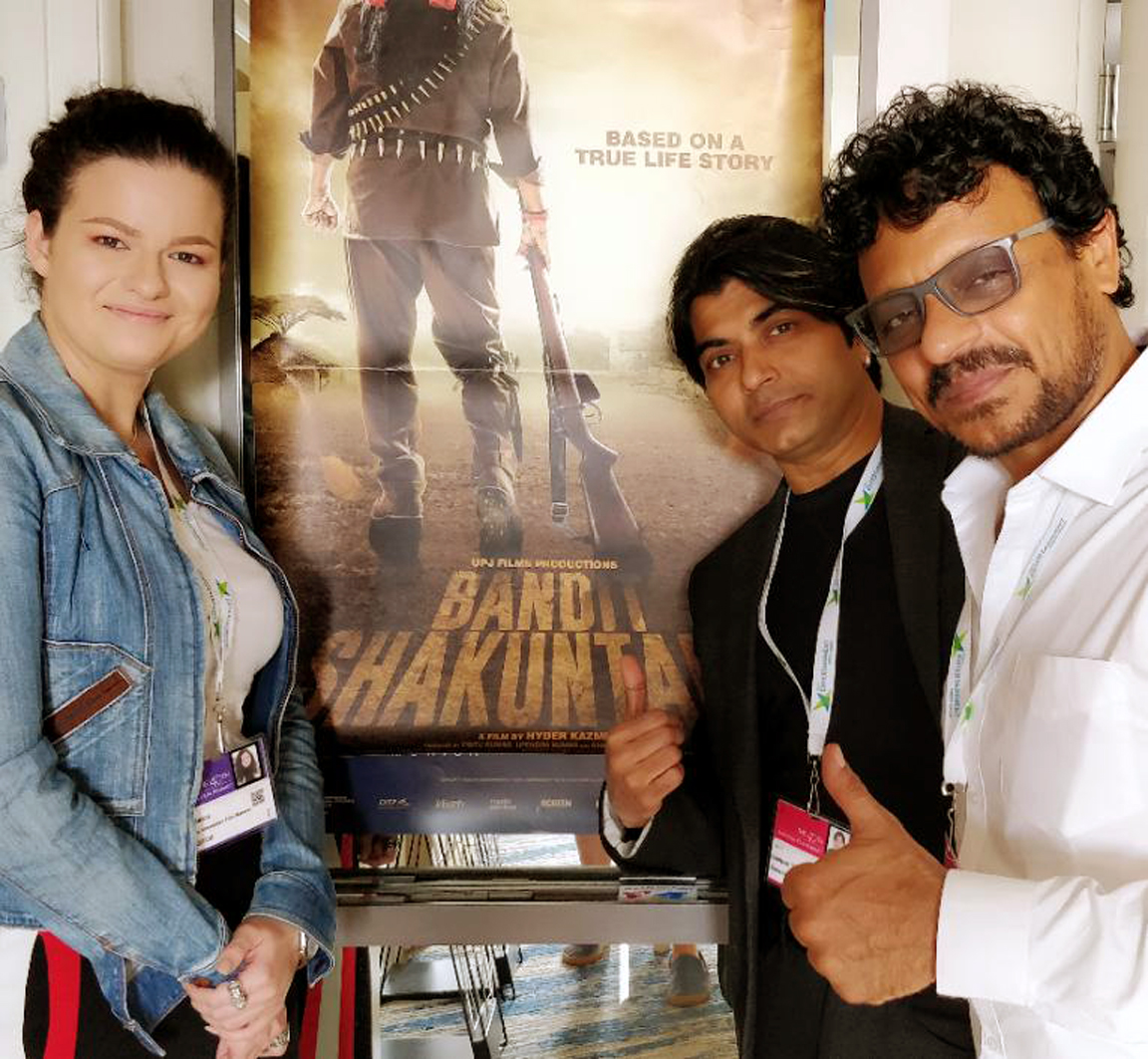 The first look of the Movie "BANDIT SHAKUNTALA" which is based on a true life story of Dacoit Shakuntala of Bihar was revealed in the 40th American Film Market - AFM by Director Hyder Kazmi and Co-Producer Liaquat Gola along with Irina Ratcu of Alien Films, Romania.

The film also marks the collaboration between UPJ Films and productions and Alien Films, Romania for the sales of the film for European Countries.

Being made under the banner of UPJ Films And Productions for

Dwapar Promoters
Bandit Shakuntala will be premiered in Cannes Film Festival In May 2020, to be followed by a worldwide release.

It is a true story of a Dacoit named "Shakuntala" of Bihar district Madhubani. It is a true tale of bravery, suffering, hatred, love, violence, power & injustice against women in rural India.

The main attraction about this film is that the narrative of this Woman Warrior Shakuntala will be essayed by the original Dacoit Shakuntala herself through her eyes and in her own voice in the movie "Bandit Shakuntala".

She was born in a very small village of Bihar in India to the lowest caste. Enduring cruel poverty, Shakuntala survived the humiliation of being poor and helpless. But she decided to study hard for making her life better. During which she was kidnapped and raped by a rich powerful man of the same village when she was just 12 years old.

After which she tried to get Justice with her family which they failed to receive. Shakuntala was made to suffer a series of terrifying ordeals as a result of pleading for justice against the man who raped her. She was forcefully married to a old man by her uncle. Shakuntala ran away. Later her uncle also killed her father brutally for a little piece of land.

The uncle also helped the rich man to rape Shakuntala once again on the day of "Holi". After that she was horrifyingly ganged raped by 30 man. She was kept in jungle for 10 days without clothes in which these men raped her again and again just because she asked for justice.

One day a man called "Nadeem" saved her. This guy who belonged to a Bandit group. He took her along. He taught her everything to become a Bandit. Shakuntala became BANDIT SHAKUNTALA.

She delivered justice to all low-caste women and rape victims and stole from the rich to give to the poor, before negotiating her surrender on her own terms.

A khaki uniform-and-bandana clad avenger of outrages by high caste against low, and by men against women and for loosing all her loved ones. Throughout her years of imprisonment without trial, Shakuntala remained a beacon of hope for the poor . She had over 33 cases on her but none of them were proved due to lack of evidence and that's how she was released out of jail.

Then she started with a new journey, the journey of a social worker. Now to serve the society not through the barrels of a gun but through peace, love & retribution.


Source :
This Article/News is also avaliable in following categories : Udaipur Plus
Your Comments ! Share Your Openion