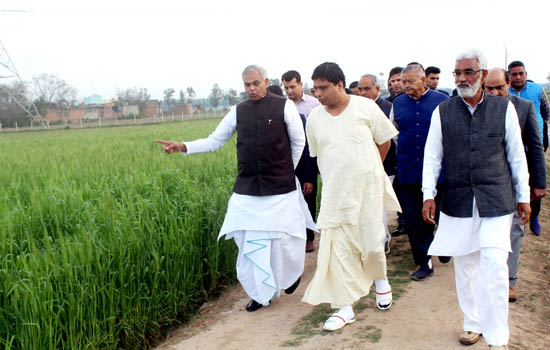 The world economies are in the midst of Corona pandemic, the conditions in India are also perturbing. There is only hope on agricultural practices. In such a situation, the utility of zero budget farming has become easily polyploid. But like other countries of the world, the people of India have also followed western culture not only in their life but also in agricultural practices of the past several years. In this machine age, food is also becoming poisonous due to chemical fertilizers and pesticides used for growing food grains. In the name of promoting agriculture in the country, the soil of earth has become poisoned by the extensive use of chemical fertilizers for a long time. The fertility of soil has been decreased.

The fact is that multinationals have disturbed India's agricultural practices. Defying the understanding of the agricultural research centers here, they have spread their seeds to increase the business of hybrid fertilizers, chemical fertilizers and pesticides. Farmer-life has been victimized by this cruelty, by stopping the traditional seed preservation and fertilizer preparation method and made them dependent for agricultural products. The Indian cottage industry and small business, scorched by the toxic actions of the American Walmart and Mosanto companies, have hurt India's folk art, traditional skills, etc., and its cultures were also attacked. Now continuous efforts are being made to improve paralyze agricultural work. In such anomalous and complex conditions, the efforts and experiments of Acharya Devvrat, the Governor of Gujarat, are not only strengthening natural farming and zero budget farming; Indian agriculture is becoming unique and eccentric to the economy of India.

Zero cost natural farming has emerged as a major option with a view to liberating the earth from chemicals and providing pure food items to the citizens of the country. Late Rajiv Dixit (founder of ‘Azadi Bachao’ movement) has described the homegrown cow as the basis of economic prosperity, natural farming and cow protection of every household in India, similarly Subhash Palekar of Maharashtra, who led the campaign of Zero Budget Farming.These campaigns are being carried forward by the Governor of Gujarat Acharya Devvrat as a movement. Due to his efforts, new areas of agriculture are taking shape in Gujarat. Prime Minister Narendra Modi has also praised his efforts in natural farming and improved lifestyle in the Conference of Governors and asked them to implement them in all the states of the country.

After Himachal Pradesh, now as Governor of Gujarat, Acharya Devvrat is doing many such things, due to which, not only in terms of agriculture and natural life, but in many areas, the ideal values of pure environment, Indian culture and lifestyle have attained new status in Gujarat. His activism in different works like sanitation and environmental protection, drug prevention, water conservation and literacy, harmony, natural agriculture and cow rearing and Beti Padhao-Beti Bachao are inspiring and exemplary. A Gurukul in Kurukshetra (Haryana) has run by him successfully.He made unique and successful experiments of natural life, farming and advanced life for a long time. Being the Governor of various states, he carried forward these experiments and encouraged the farmers and gardeners of the state towards natural farming, due to which thousands of farmers are currently upgrading their lives by doing agriculture and horticulture. Not only this, the state governments have also made provisions in the budget to promote this natural farming. More than 30 thousand farmers of Himachal Pradesh are now doing zero cost natural farming whereas 50 lakh farmers in South India have adopted it.

The state of Sikkim, which has adopted organic farming all over India, has now started work on the plan to adopt zero cost natural farming as organic farming has greatly reduced the production of food grains of Sikkim whereas zero cost natural farming leads to higher production. The Government of Uttar Pradesh has also adopted the chemical-free farming mantra of Acharya Devavrata.

The adoption of cows and their indigenous breeds has been promoted. The campaign of natural farming from cow dung and cow urine has also yielded unique results. Because there is no cost in doing this natural farming based only on native cow. The farmer fulfills the nutritional requirements needed for the farm only by cow dung and urine. At the same time, by adding cow dung and urine, lassi and jaggery etc., the farmer can also prepare natural pesticides in the field. Secondly, natural farming is quite simple and beneficial compared to organic farming as natural farming can be done on about 30 acres of land from a native cow. While organic farming requires about 20 cattle dung in an acre. This charisma is only and only from the Zero Budget Natural Agriculture Model, for which the farmers of the entire nation owe to Acharya Devavrata.

Zero-cost natural farming is no less than a boon for small and marginal farmers because at present, farmers have to resort to debt to pay the huge cost of chemicals etc. for farming and this debt burden keeps increasing. Farmers are not only getting into debt by using chemical fertilizers, pesticides and pesticides but are also cultivating poison in the fields. This poison goes into our body through cereals & vegetables. Due to which serious diseases like cancer, heart attack, and blood pressure are continuously spreading. If we want to keep our family & society healthy then we have to return to natural farming. Weekly spraying of cow dung and cow urine solution is done as natural fertilizer and also does not destroy the fertility of the land.

Kan Singh Katrathal, an experimental farmer of Sikar district in Rajasthan has achieved encouraging success by doing natural farming in his field. According to Mr. Singh, earlier he used to do chemical and organic farming, but natural cow farming and cow urine based Zero Budget natural farming is proving more beneficial.

The statistics related to biological and chemical farming are shocking and dreadful. Due to this, thousands of farmers have committed suicide. These facts make us think on the basic questions of the destruction of the Indian farmer. The internal system of Indian agriculture and its usefulness can be clearly understood here. The continuous use of chemical fertilizers, pesticides has led to wastelands, falling water levels, floods, droughts,  inundation, untimely thunderstorms, storms, rains, lack of improved seeds, livestock deaths, crop loss and all other kinds of disasters. Due to lack of proper marketing of its damaged product due to being, liberalization, mandating, etc., there are reasons for increasing discontent and misfortune in the lives of farmers. As a result, family discord is increasing in a state of stress and anxiety, instead of getting rid of its problems; it is constantly getting entangled in other problems. In such a complex time, a new environment is being created due to the efforts of Acharya Devavrata and farmers are getting relief from their problems.

With the help of data and facts, Devavrata has looked at the problems of the farmers of the country very closely. He has made successful ventures to bring happiness to the disappointed faces of the farmer of India struggling with discrepancies and contradictions. What India called developed nuclear power, IT superpower and emerging Asian lion, two thirds of the population of the same India is dependent on agriculture and its condition is getting worse. In these conditions, Acharya Devavrata has seen the economics of agricultural culture in the context of folk culture. He has underlined the folk life in the entire context and due to feudal rites.

Significance of Yoga against Corona