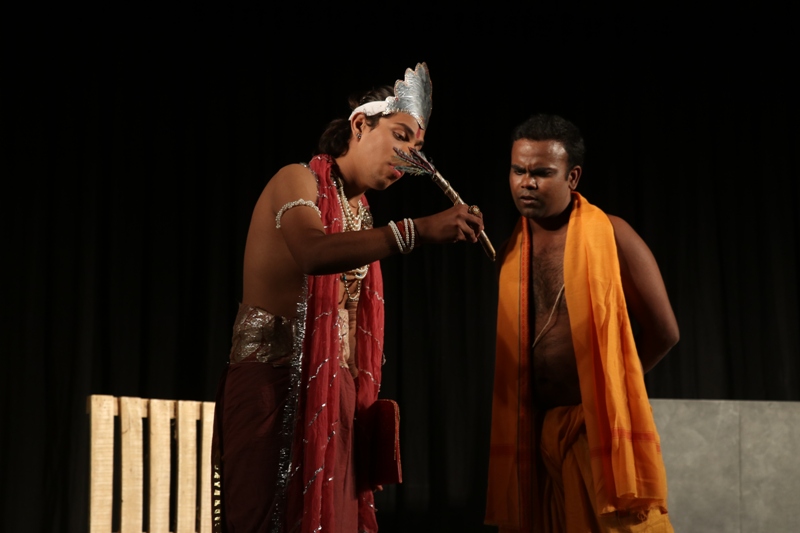 Ashok Rahi himself is an established playwright. He has also written daily column of his satire “Baat Karamaat” for Rajasthan Patrika for years. He catches wit from small instances and imbibes them in his writing with enormous freshness. Same thing was visible in the play “Ajab Chor ki Gazab Kahani” which he adapted from the old story “ Charandas Chor” of  noted folklorist Vijaydan Detha. Ashok Rahi presented this play in Folk Theatre style imbibing of chorus, local flavored folk music of Brij region, dances and colorful costumes. Instead of using other paraphernalia he used Mime. He worked more on characterization to make each scene enthralling. Adding contemporary and popular humor his actors kept audience engrossed throughout the play. His team with high level of discipline and dedication took the play to new heights.
Hero is a petty thief, who jokingly pledges to tell the truth to his Guru. At the same time, he makes four more vows that he will never eat in golden plate, ride an elephant in a procession, will not marry a queen and will not accept becoming the king of a country. The thief steals without lying and becomes renowned. He commits the biggest and last theft of his life from the Royal treasury. He admits his theft without any fear and at the same time unveils theft of Royal Treasurer. The Queen gets highly impressed and admires the courage of thief to the extent she offers all the Royal facilities like food in golden plate, procession on the elephant and wants to make him a king by proposing marriage to him, but the thief, dire honest to honor the words given to the Guru, refuses. Furious queen asks him to not go out and tell anyone, but the thief also vowed to tell the truth, so he denies this too. Because of which, the queen punishes him to death.  Honoring the words given to his guru, the thief finally embraces death.
Nitin Saini, as Chor stole the show. Pratibha Pareek as Queen, and other roles showed immense potential. All other actors like Apeksha Jain, Manish Kumar, Sanjay Mahawar, Rahul Kumar, Honey Mishra, Rauni Singh, Akshay Kashtiya, Jai Soni, Khalid Khan, Sahil Arora, Yashwant Singh, Rajat Sharma, Hrithik Pankaj, Vinay was Lokendra Singh, and  Ravikant played their roles effectively.  Lyricist Kailash Manhar and composer Mukesh Verma Soni  assisted by  Pradeep Pareek and Yogesh Jangid on Lights contributed their talent to make play interesting.
Next evening staging of “Master Sahab” exposed the declining human values ​​in the society. How poor people are exploited by the rich. This strong creation of Gurudev Ravindra Nath Tagore was adapted and directed by Dr. Laique Hussain. This musical play was staged in Mewari. Dr. Laique Hussain  and his team strives to give their  production local colour. The team of actors included Shubham Ameta, Ajay Sharma, Deep Raj Singh Baghela, Ishaan Tandon, Ashok Kumar, Juzar Nathdwara, Kunal Mehta, Yogita Soni, Dipendra Singh Chundawat, Vibhash, Priyal Jani, Dharvi Dixit, Mo. Hafiz, Shivangi Tiwari, Farhana Khan, Hussain RC, Geetisha Pandey,
Music pit included artistes like Ramlal Bhat, Bhavna Dhandanda, Rais Khan, Shubham Ameta, Shalu Verma, Deepraj and Ajay.
Lights were looked after by Krishna Kumar Ojha and Mushtakh Khan while Rajkumar Mogiya looked after Sound. Anukampa designed costume and Shipra Chaterjee choreographed dances. Prabuddha Pandey assisted the director Dr. Laique Hussain to make this play effective.

The Festival was concluded on 27 March coinciding with World Theatre Day. The play "Karam Pajokhi" was staged by Natyadharmi Art Society, Jaipur directed by Kuldeep Sharma.
The word Pajokhana is a Rajasthani stands for to try and hence, Karam Pajokhi means instead of cursing ill luck one should try the karma. A young man named Buddhi somehow gets a few gold coins and loses them too in short time. Knowing this as fate, he decides to go in search of destiny, he finds Guru and with deep practice he gains some spiritual powers but comes to know the ill fate of Guru’s children and becomes uneasy. Finally he determines to defeat the fate. . Eventually, through his hard work and wisdom he wins over the God of fate thus brings good fortune to Guru’s Children.
The team of actors like  Neha Dhakad, Ankit Sharma, Madhu Dewasi, Manas Mokhal, Raman Acharya, Nidhi Jain, Abhishek Bairwa, Usman Tanwar, Deepak Sharma, Lakshmi Jaludriyan, Rahul Panwar, Pratham Mittal, Anmol Deep, Kshitij Kumar, Prabha Sharma, Sanjay . The story was powerful, but it needed editing and brushing. Un wanted prolonged pauses caused dragging. The Director should work more on such issues to make play crispier. The organisers deserve appreciation that they are doing good job to preserve and promote Rajasthani. Many new words were added the vocabulary of audience. Honoring regional languages would certainly go a long way to preserve the rich cultural heritage of Rajashtan .