Rajasthani costumes were seen in Gaba 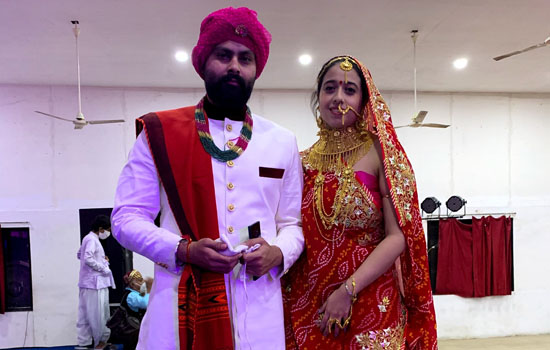 Udaipur. After the ramp, not only the young men and women wearing one Rajasthani dress, but the cat walk of the boys and girls became enchanted. The presence of the contestants with sweet smile brought alive the Rajasthani culture.
The occasion was Friday under the Rajasthan Sahitya Mahotsav Adav, a Gaba fashion-show based on Rajasthani clothes. Taking care of the government's rules regarding Kovid, the Gaba fashion-show organized on the day before the scheduled event made the participants confident. Suddenly after the information of 144 Section of District Administration, the boys and girls along with the young men kept their spirits alive and introduced them to the Rajasthani culture by holding the cat walker Rajasthani dress in Ashoka Green on Friday.
In the short term, the hard work of the past 20 days paid off when the organizers and the contestants made their surroundings on the ramp wearing Rajasthani costumes prepared by themselves and made the atmosphere Rajasthani.
Vice Chancellor of Sukhadia University, Prof. Under the inspiration of America Singh, Miss India Ritu Khosla, the contestants in turn introduced traditional Rajasthani costumes. The participants on the ramp caught their attention by wearing Rajasthani traditional clothes worn in the areas of Jaipur-Udaipur-Barmer, Jodhpur-Jaisalmer, Ganganagar etc. Most of the costumes worn at the Gaba fashion-show are redesigned by Sukhadia University The garment was a traditional Rajasthani garment designed by students. Under the GABA program, Rajasthani costumes were not only prepared by the students of the university but also performed a cat walk on Rajasthani music which was also appreciated by Miss India Ritu Khosla.
On this occasion, Advocate Director Dr. Shivdan Singh Jolavas told that after the increase in Kovid case, the decision of the district administration had to precede the scheduled event of the GABA fashion show and the participants made the program memorable by its excellent performance in a short time. Dr. Doli Mogra, convenor of the GABA program, said that the way in which the traditional costumes of Rajasthan were displayed by the students, the students got a chance to interact with different kinds of clothes. In future, the saga of GABA costumes will be organized with the students of the university. It is not only to motivate students with self-employment education, but also to keep them connected with culture. Dignitaries of Lions Club, Sanjay Bhandari, President of Lions Elite Udaipur, Nitin Shukla were present in the program. The program was conducted by Rajendra Sen and Soumya Kavadia.